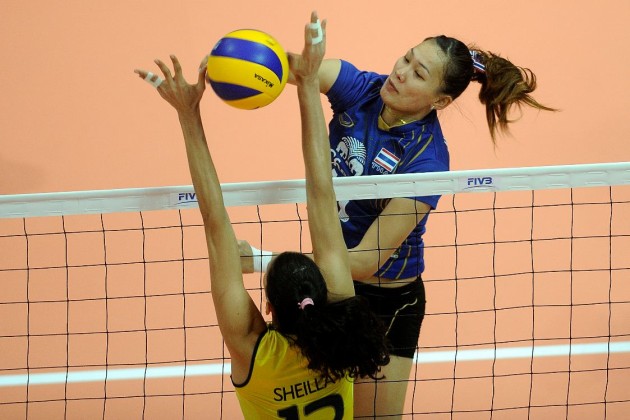 Despite a solid resistance from Thailand, the Brazilians showed overwhelming powers on the net and book the 25-20, 25-23 and 25-14 victory over Thailand.

The Thailand women, who defeated host China 3-2 only 15 hours ago, started strongly against the Beijing Olympic Games gold medallist, racing to and 8-4 lead in the opening set. Brazil managed to tied the game at 9-9, but Thailand again went ahead to lead into the first TTO 16-12.

But Brazil then had a 6-1 run to overtake the lead for the first time at 18-17 after never let the chance go, claiming the first set at 25-20 with a kill from Paula Pequeno in a counter-attack.

Brazil fought back their trademark offense as Adenizia Silva prevailed with great hitting efficiency. But the Thailand team soon answered with their typical fast attacking and Kanthong Malika came out with a powerful kill to help her team pull within 14-14.

Tied at 22-22, a serving error from Thailand and Silva‘s kill gave Brazil two set points, Pleumjit Thinkaow saved one for Thailand with a excellent tactics spiking, but Brazil held the second as Menezes Thaissa‘s high spike proved too much for the Thailand defense.

Brazil came back in the third set with improved blocking against Thinkaow and Onuma Sittirak to lead at 13-9. Thailand managed to stay in the game, but firing power from Rodgrigues and Silva kept Brazil an obvious advantage on the net and Brazil extended the lead to 20-13.

Brazil ran off five of the last six points, Danielle Lins and Jaqueline Carvalho combined to have a success block and Brazil take the set at 25-14 as well as the final victory.