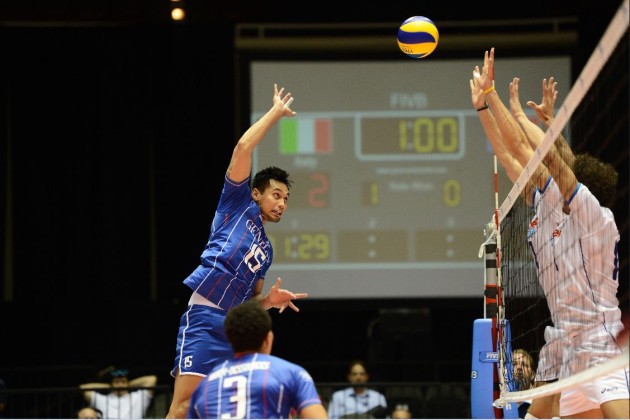 The victory improved France’s record to 7-3, but as the match went to five sets, France only earned two points and still trail the United States by a point ahead of the Americans’ match against Korea later on Friday.

Marien Moreau led France with 24 points on 20 attacks and four blocks. Italy’s Michal Lasko led all scorers with 26 points on 21 spikes, five blocks and one ace.

The teams were almost even in statistics with Italy leading in attacks 62-61 and in blocks 16-15. France led the aces 5-4.

The first set stayed close with neither team gaining a lead of more than two points. France reached set point first at 24-23, but Italy fought that off and three more until the score was tied at 28-28. Italy took its first set point at 29-28 on a French violation, but then tied the score with a hitting error. Italy took its second set point on an attack from Zaytsev and won the set on a spike by Lasko off a France block attempt.

The second set stayed close until 21-21 when the French side used an attack from Tuia and a block to take a 23-21 lead. A block from Moreau and Jose Trefle gave France set point. Italy came back to score with a Zaytsev roll shot and block by Fei and Lasko. France called timeout and won the set with an attack from Tuia.

France jumped out to a 4-1 lead in the third set and extended it to 8-4 at the first technical timeout and 16-10 at the second. France reached set point at 24-17. Italy scored one more time before France won the set.

Italy led 8-7 at the first technical timeout of the fourth set and used an attack by Fei followed by two straight blocks to extend the lead to 11-7. France never caught up.

The teams were tied 8-8 in the fifth set when France pulled ahead on two straight Italy errors. France reached match point at 14-12 and won the match on an ace by Earvin Ngapeth.