Lausanne, Switzerland, December 22, 2011 – The FIVB World Grand Prix Finals will return to Ningbo, China once again in 2012 with the city hosting the event for the second time in three years. 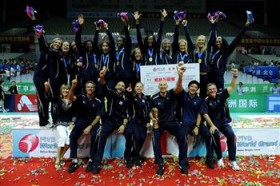 Ningbo last hosted the finale in 2010.

In the same format as 2011, a total of 16 teams will battle it out across three weeks of pool-play in 10 countries from June 8 to 24 ahead of the Finals in Ningbo.

The top five ranked teams at the end of the three weeks of Preliminary Round action will join hosts China in the Final from June 27 to July 1 where they will be split into two pools of three teams. The top two teams from each group will move on to the semifinals with the winners reaching the finals while the losers play for bronze.

The US followed up on their success in 2010 a year later when they successfully defended their title, again beating Brazil, this time in the final, to deny the South Americans a ninth championship. Serbia finished in third after beating eastern European rivals Russia in the bronze-medal match, finishing on the podium on their first attempt.

Ningbo is located to the west of the Pacific Ocean, in the mid-coastline of mainland China and is embraced with seas on three sides, with Hangzhou Gulf to the north, Xiangshan Harbor to the south and Yinzhou District to the west.