The whole nation will be with Dutch volleyball girls today. 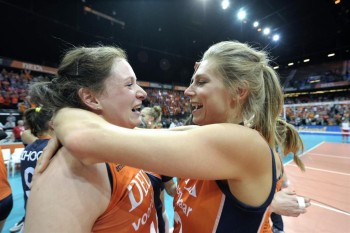 The Netherlands are in the finals of EuroVolley 2015. When they applied to be hosts of the tournament, both players and the fans secretly hoped that this team can make it all the way to the end. And they there are! One step away from winning the gold!

Manon Flier said for WorldofVolley that right now the Dutch squad are able to beat anyone.

“We were expecting a tough match against Turkey obviously. It was a semifinal after all. They are a great team, but right now we are playing so good that we can win against anyone. We really feel this crowd. All these people that support us, help us think positive and play our best volleyball. Together we are so strong.”

Experienced player stated that she has never seen this kind of volleyball atmosphere in her country.

“I’ve seen it only in Japan and Poland, maybe in Brazil too, but never in Netherlands. You know, volleyball is a sport that lot of people play, but there are not many game broadcast on television, nor there are so many spectators on the stands. But, this is amazing. They made this great project to put volleyball on the map again. Now, they expect more that 10.000 people in the finals! It’s just great!”

LIVE from Rotterdam: The bronze belongs to Serbia!