Defending champions Brazil survived a serious challenge and went on to outduel Turkey in thrilling five-setter (25-18, 23-25, 25-19, 25-27, 15-12) in the nightcap of opening day of the Olympic Games women’s volleyball tournament at Earls Court. 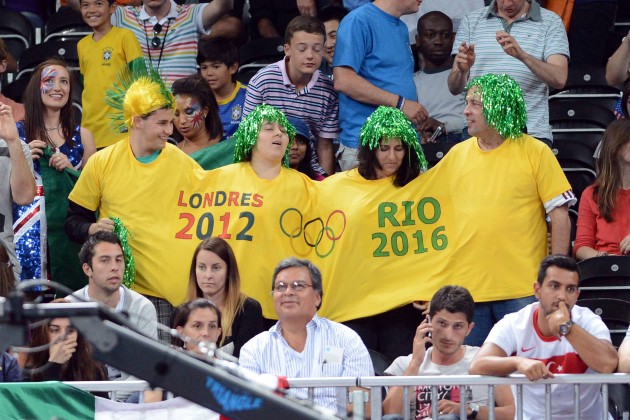 Veteran Sheila Castro led the Brazilian side with 19 points, followed by Jaqueline Carvalho and Thaisa Menezes with 13 and 12 respectively. Fernanda Rodrigues and Fabiana Claudino each notched 10 points. Turkey’s Neslihan Darnel topped the defeated side with 18 points while Gozde Sonsirma and Neriman Ozsoy each collected 15.

Brazil totaled 15 blocks to 11 by their opponents and also held a slight advantage in the aces category of 9-5 in the match that lasted 2 hours and 9 minutes.

In the first set, Brazil eased into an early lead, largely thanks to the blocks and spikes of Menezes along with errors from a nervous-looking Turkey side. Darnel and Sonsirma provided the main attacking threat for Turkey, but as the game went on the class of Brazil captain Claudino, spiker Castro and Paula Pequeno began to show.

The second set was well fought, but the calm control of libero Fabiana and Fernanda Ferreira kept Brazil‘s defence water-tight, while Turkey increased in confidence and scraped an 11-10 lead.

Ozsoy began spiking extremely effectively for her side along with Darnel and Sonsirma. In a thrilling end, Turkey won two crucial final points to sneak the set 25-23.

Brazil went ahead in the third set, with Castro hitting an ace and spurring her side on. But Turkey leveled at 5-5 and the two sides traded points evenly deep into the set with Menezes, Castro, Carvalho, Claudino, Ozsoy and Darnel all scoring. But Brazil’s solid blocking started to get the better of Turkey, allowing the South Americans to go ahead, and then hang on for a hard-earned 25-19 set win.

Brazil opened the final set with an ace from Ferreira, and as the exceptional blocking of Rodrigues and Claudino continued, they managed to narrowly outplay Turkey, with Castro leading the scoring. However, Brazil started to make mistakes and Turkey pulled it back to 22-22. After both sides had match points, Turkey sensationally won the set 27-25 to force a tie-breaker.

Errors dominated the point scoring in the fifth, with both sides playing nervously as they struggled to get ahead. But Carvalho, Menezes and Castro landed crucial spikes to put their side ahead, allowing Brazil to hold on for a 15-12 win.

It was a thrilling match between two superb teams, eventually won by the side that made the fewer mistakes. Brazil play key rivals USA in the next round of preliminary matches on Monday, while Turkey take on China.