Defending champions Brazil and silver medalists United States triumphed in their respective matches during opening day of the women’s volleyball tournament of the London Olympic Games but not before going through some scary moments on Saturday. 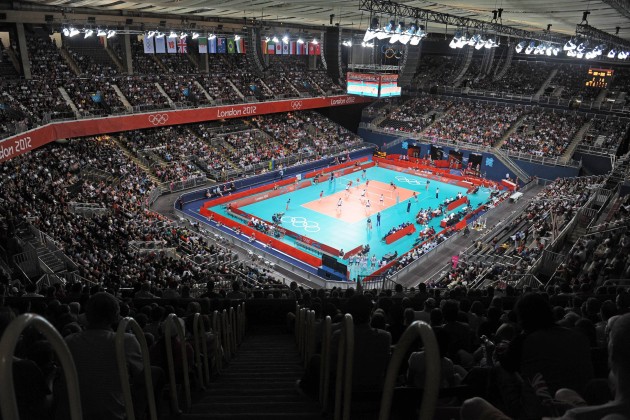 While USA were tested by a relentless Korea and their superstar Kim Yeon-Koung’s 29 points before claiming a four-set victory, Brazil held off the persistent counterattacks of a high-spirited Turkey team in a five-set duel of  2 hours and 9 minutes at Earls Court venue.

In the other matches of the opening day, Japan and Russia swept Algeria and hosts Great Britain respectively, while China and Italy prevailed in four sets against Serbia and Dominican Republic.

Japan started its Olympic campaign by beating Algeria 3-0 (25-15, 25-14, 25-7) to take maximum points from the opening match of Pool A. This is Japan’s third consecutive victory in straight sets over Algeria in international competitions and a very encouraging start for the Asian side. Saori Kimura paced Japan with 15 points with Saori Sakoda also finishing in double digits (10). Zohra Bensalem topped Algeria with nine points. Japan’s captain Erika Arika scored three aces in her limited action while Risa Shinnabe added two more winners with her serves. The winners dominated in the aces category 7-1 and also were better in blocking 6-3.

World No. 3 China recovered from a 0-1 deficit to play solid volleyball the rest of the way to beat Serbia 3-1 (16-25, 25-18, 25-13, 25-12) in a match of Pool B. Xu Yunli led four China players with double digits in the score charts with 17 points, including seven blocks. Hui Ruoqi added 14 with three aces, while Wang Yimei and Yang Junjing tallied 11 points apiece. Serbia’s Milena Rasic finished with 14 and Stefana Veljkovic had 10. China held advantages of 11-9 in blocks and 7-2 in the aces category.

World champions Russia beat the home heroines of Great Britain in three straight sets (25-19, 25-10, 25-16) with Prime Minister Dmitry Medvedev also in attendance for the debut of the group coached by Sergey Ovchinnikov. Nathalia Goncharova and Ekaterina Gamova led the winners with 14 and 13 points respectively while Maria Perepelkina and Evgenia Estes contributed 8 and 7. British Captain Lynne Beattie was the only player with double figures on the defeated side with 11 tallies. The winners had favorable margins of 7-3 and 4-1 in blocks and aces.

Simona Gioli collected 19 points, including six blocks to help Italy in a 3-1 (25-17, 23-25, 25-19, 25-15) victory over Dominican Republic in a match of Pool A. Carolina Costagrande and Valentina Arrighetti each contributed 16 points to the winning effort while Antonella del Core added 11. Dominican Republic’s Milagros Cabral and Bethania De la Cruz registered 19 and 14 points respectively and Annerys Vargas charted nine. Gioli was effective in 13 of 22 spike attempts and was 6-for-15 in blocks. The winners held a slight margin in blocks (10-8) and won 4-1 the battle from the service lines.

World No. 1 USA totaled fifteen blocks en route to a 3-1 (25-19, 25-17, 20-25, 25-21) victory against a relentless Korea. It was the 22nd win for the Americans in 35 matches with Korea, including the last five in a row, eight of nine and nine of the past eleven against the Koreans. Destinee Hooker most productive American with 21 points and Jordan Larson followed with 16. Foluke Akinradewo had six blocks among her 15 points and Christa Harmotto finished with 10 and three blocks. Korea’s scoring machine Kim Yeon-Koung had a match-high 29 points while Han Song-Yi and Hwang Youn-Joo each charted 12.

Defending champions Brazil overcame Turkey in a thrilling five-setter (25-18, 23-25, 25-19, 25-27, 15-12) in the nightcap of opening day. Brazil totaled 15 blocks to 11 by their opponents and also held the advantage in the aces category of 9-5 in the match that lasted 2 hours and 9 minutes. Sheila Castro led the winners with 19 points, followed by Jaqueline Carvalho and Thaisa Menezes with 13 and 12 respectively. Fernanda Rodrigues and Fabiana Claudino each notched 10 points. Turkey’s Neslihan Darnel topped the defeated side with 18 points while Gozde Sonsirma and Neriman Ozsoy each collected 15.