When the players are escorted to the warm up courts and then accompanied to the field of play at Earls Court, they may think that the tall man with a imperceptible Dutch accent is a former player. What they might not guess is that Gerard van Zwieten from Rotterdam is a former Olympian, specifically one of the players who brought volleyball to the first Olympic Games in Tokyo in 1964. 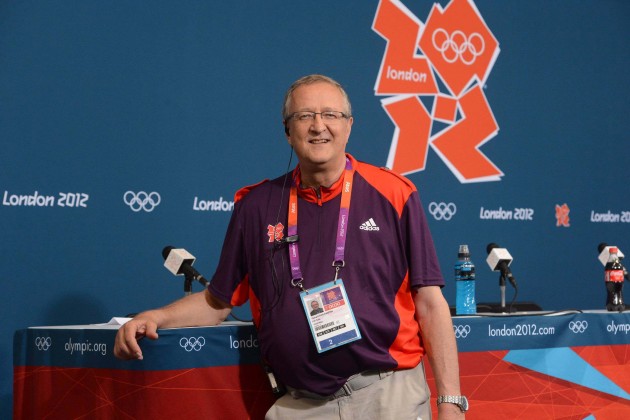 Born in Rotterdam, but currently living in Loughborough, Great Britain, and working for Volleyball England, van Zwieten was an 18-year-old player when he was chosen to be part of the Olympic expedition to Tokyo.

“I’ve started playing volleyball when I was about 8” said van Zwieten during a pause of his duties at Earls Court. “In my country it was very popular, lots of people played volleyball at school and still nowadays it is number 4 sport in The Netherlands. I’ve learnt to play volleyball very young and while I was playing I had all my licensees as trainer, but they expired after some years as I had a job to do.”

He was project manager for Eastman Kodak. For 25 years he then travelled in different countries to eventually arrive in England, where he decided to settle down. “While travelling, I had another Olympic experience: I had the luck to do Special Olympics with my company when I was in Austria. But London 2012, after Tokyo, is my real second Olympic Game ever.”

His new life in volleyball comes up when, during Easter time, van Zwieten went to see a tournament. He was practically the only spectator. Lisa Wainwright, chief executive of Volleyball England, spotted him out and had some talk with him. Three weeks later he was offered a position. After two years and a half, he is still working with what they call CDC.

“I’m doing Community Development Coach. My area is to develop Universities and secondary schools, linking them to clubs and try to make clubs bigger. We work mainly with 14 to 25-year-old boys and girls, I started more than two years ago and we have already strong communities. One is Polish.”

Talking about the Olympics, his memories are going back to that incredible year were our sport saw for the first time the five rings. “My playing role was outside hitter, I was already 190 centimeters when I was 14. We played the old 4-2 system, with two setters, so I was setting as well. And then Tokyo came, that was 1964. I was 18 and I was asked to go with the team. I wasn’t in the first six, because we had a primary six. I was sitting on the reserve bench but I got my chance to play.”

In the first venue in Komazawa and then in Yokohama Cultural Gymnasium, The Netherlands found their way to get the 8th place. “The facilities were good. However the Dutch Volleyball Federation was not so rich and most of the training stuff we had was from ourselves.”

The tall guys coming from Holland breathed the fascinating Olympic atmosphere, but they were particularly hit by what they saw there.

“It was the fact that Japan was so far in developing Volleyball. We learned from Japan so much. We went to one of their schools and we saw the training hours they were put in: six hours a day, without any problem. That was not the standard for us and many other teams. We came together like three times a week and we did on Saturday morning strength and conditioning training. And nutrition, hardly heard of at that time.”

Forty-eight years after, Gerard van Zwieten saw the Olympic rings again with the eyes of a youngster and these rings are the springboard for his new objectives.

“Due to the fact that government has no money for that, a lot of schools have not invested in volleyball. What we get here is that schools have those kind of old fashion net posts, with weighted kilos to keep them standing up and old nets. A lot of teachers do not know the rules of volleyball and therefore they’re very shy to do volleyball in their normal curriculum. That’s why in Volleyball England we developed three difference courses and we start from “catch and throw”. The kids love that. Hopefully with the atmosphere“