Under the lead of CEV Vice President and President of the Jury, Jan Hronek, and the President of the Turkish Volleyball Federation, Erol Ünal Karabiyik, the twelve Junior Women’ delegations, ready to shine at the 2012 CEV Junior Volleyball European Championship – Women starting on Saturday in Ankara (TUR), met tonight for the general technical meeting. 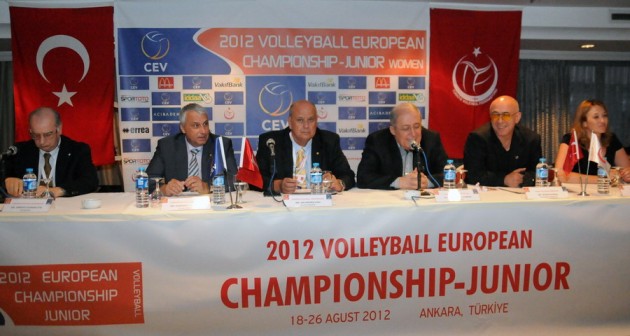 “Once again, I am feeling the happiness to be an organizing federation of another wonderful tournament as the 2012 CEV Junior Volleyball European Championship – Women which will be a stage for Europe’s young shining stars”, said Karabiyik. “Last year, we were fascinated by cheerful play of our youngsters and now we have a chance to track that thrilling generation’s second step on the way of a European title. I am sure that twelve of Europe’s best teams are letting us taste a great volleyball pleasure with their outstanding performances; volleyball fans in Ankara will join this emotion with a powerful ovation.”

CEV President André Meyer stated: “Turkey – a country that we all know is literally fond of Volleyball – and namely the city of Ankara and the magnificent “Baskent” sports hall are gradually turning into a real Volleyball “Mecca” as this first-class complex has been playing host to quite many international competitions since it was officially inaugurated only a couple of years ago. To prolong that tradition, the final round of the women’s Junior European Championship is also taking place there, thereby exploiting the excellent facilities available in the majestic Volleyball campus created by the Turkish Volleyball Federation as well as the expertise of the local staff and organizers. I would like to express my gratitude to the Turkish Volleyball Federation, the local authorities and to all those – including the many volunteers – that are working for the good of our sport and for contributing the right conditions to celebrate a memorable Championship in Ankara.”

The classic powers Italy and Serbia, host Turkey as well as Russia, Poland and Germany are the favorites for the crown of the prestigious CEV under 19 age category competition. Two weeks before the men’s juniors will battle for medals in Denmark and Poland, Turkey will be in the spot light for the prominent CEV event at Baskent Hall that hosts Pool I and Ahmet Taner Kislali Hall featuring Pool II.

All twelve teams have safely arrived in Turkey’s capital city which provides a perfect platform for the next generation of stars to showcase their skills on the continental stage and potentially take the big step into the giant world of the senior ranks. The action gets under way on Saturday at 14.00 (local time) with host Turkey challenging Belgium and 2008 4th ranked Germany facing Russia. A total of 38 matches will be played during the tournament, running from August 18-26.

Turkish head coach Gökhan Edman said: “It is a big difference between youth and junior level. Nevertheless, we are one of the favorites of this championship. We play at home, in front of our fantastic home crowd. We feel a lot of confidence. But the game is faster on junior level; we need to respect all opponents. In our pool, Turkey, Serbia and Belgium will probably be the best teams. In Pool II, there might be a tough battle between Poland, Russia, Italy and Germany.”
Italian head coach Marco Mencarelli explained: “Compared to some other years, we miss some tall girls in the Italian squad this year. However, we feel ready for the start of the competition and hope we might make it to the final four. Turkey and Serbia seem to be strong teams, but I’m also wondering about the strength of Russia and Poland.”
Serbian head coach Ratko Pavlicevic added: “This tournament is very important for Serbia. It is a big step towards the future. Here we’ll see how the teams have worked since the youth competitions. We feel very well in Turkey and are looking forward to enter the court tomorrow.”

NORCECA W: All set for Women’s World Qualifier in Panama