CL W: The new Queens are ready to be crowned

Only one thing is certain before the start of the 2016 Women's CEV Champions League Final Four. The crown will have a new owner... 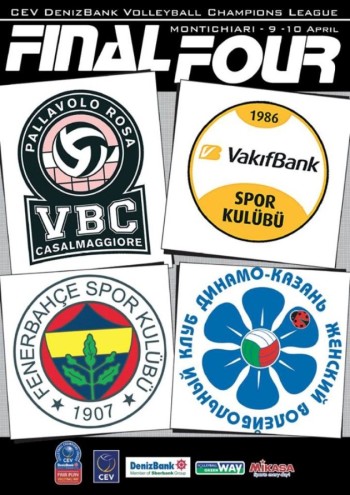 Eczacibasi VitrA are still the reigning champions of Europe, but they will have to hand over the crown to someone else on Sunday evening. The last year’s winners haven’t qualified for the 2016 Final Four, so the Old Continent will get the new ruler.

Who will that be? There are four options…

Pomi Casalmaggiore – The champions of Italy and the hosts of the final tournament. Whoever says that the Italian side are a clear underdogs at the following F4 is simply wrong, or he/she hasn’t watched the main stage of the 2016 Women’s CEV Champions League.

Just to remind you, Pomi Casalmaggiore finished at the first spot in Pool C, in front of the two participants of the last year’s Final Four – Chemik Police and none other than the reigning champions Eczacibasi VitrA! On top of that the Pink squad will have a home court advantage which is always a very important asset. Pomi Casalmaggiore have never won the CEV  Champions League… Perhaps it is time to write the history.

Dinamo Kazan – The champions of Russia! To be fully precise, the 5-time-in-a-row champions of Russia! They are a world-class team, determined to make success in every competition. The Russian powerhouse lost only one single game in this CEV Champions League season and that defeat came in the last round of the main stage when Dinamo Kazan have already secured the top spot in Pool A.

They won the 2014 CEV Champions League, while then they failed to reach the Final Four in 2015. Therefore, now they return to the big event with one and only goal – To bring the crown back in Kazan.

Fenerbahce Grundig – The Champions of Turkey! Certainly one of the most dominant teams in the current season! The Yellow Angels have won all games in 2016 Women’s CEV Champions League so far, while if they add two more wins they will repeat the success from 2012.

Back then, Fenerbahce Grundig won their first ever European crown. Unfortunately for them, it was also the last, as they haven’t reached the F4 since then. But, now they are finally back at the big stage and they want to go all the way to the end.

VakifBank – The only team at this Final Four that have 2 CEV Champions League titles! The Istanbul powerhouse was officially the best team in Europe in 2011 and 2013, while it is also interesting to mention that VakifBank missed just one F4 in the last 5 years!

They also haven’t lost a single game in the current Champions League season, so they have a chance for the perfect score. If they do  that they will be the champions of Europe for the third time in club’s history.

Take a look at the schedule of the 2016 Women’s CEV Champions League Final Four, while also do not forget to vote for your favorite team in our latest Poll.

And, of course, stay with WorldofVolley and follow LIVE action from Montichiari.