A fascinating matchup in Rotterdam between the Netherlands, ranked 41st in the world, and world No. 45 the Dominican Republic opens the World League 2013 qualification process starting on Saturday. 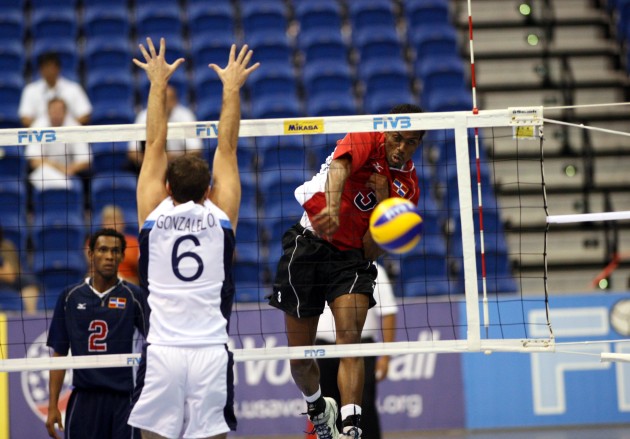 Four teams are involved in the first round of two, with the Netherlands taking on the Dominican Republic in Rotterdam on August 24 and 25 followed by Egypt against Iran in Cairo on August 31 and September 2.

The winners of each of these contests will play either Japan or Portugal – the 15th and 16th placed teams in the 2012 edition of the World League – in the second round.

The Netherlands will start the opening encounter in Rotterdam as favourites despite the close proximity of the two countries on the FIVB world rankings. The two teams have played each other only once before, with the Netherlands beating the Dominican Republic 3-1 in pool play at the 1974 World Championships in Mexico.

Despite the favourite tag, the Netherlands coach Edwin Benne is not taking lightly the Dominican Republic, who are aiming to participate in the World League for the first time.

“The Dominicans have a good team, with some players that play or have played in Italy. They play spectacular, Caribbean volleyball that looks a bit like the play of Cuba,” Benne said.

The Netherlands has a rich history in men’s volleyball, with a 1996 Olympic Games and World League gold medal to its name in addition to five silver medals and a bronze. They sit ninth on the overall honours ladder behind Russia, Brazil, Italy, Cuba, USA, Serbia, the Czech Republic and Poland.

However, with those glory days of the 90s a distant memory, Benne, who was part of the Dutch silver medal winning team at the 1992 Olympic Games, says the World League is crucial to the Netherlands returning to the top of men’s volleyball.

“In the World League you get the opportunity to play against the best competitors in the world on a high level,” said Benne, who was appointed Dutch coach in March last year. “The chance we get now can help us return to the international top faster than we aimed for. We will do everything we can to cash in on this opportunity.”

The last time the Dutch participated in the World League was in 2010, when they finished 11th out of 16 teams. That prompted a decision from the national federation to withdraw from the 2011 edition. Since the establishment of the world’s most prestigious annual men’s volleyball competition in 1990, the Netherlands have been in 16 of the 23 editions and won one of each medal (silver in 1990, gold in 1996 and bronze in 1998) while finishing fourth and fifth three times, respectively, to stand as the ninth (of 25 teams) most successful World League nation of all time.

Meanwhile, the Dominican Republic have improved significantly in recent years under the guidance of new coach Osiel Vazquez of Cuba, just missing out on the FIVB World Championships 2010 when they relinquished a two-set lead and lost to Mexico for the last remaining NORCECA spot in the competition. Incidentally, the Netherlands also failed to qualify.

“Our players have accepted the challenge with dedication and they have worked very hard in our training,” Vazquez said. “Now we have to take that to the competition. The serves and attacks of (captain) Jose Caceres and Elvis Contreras are our main weapons but the supporting cast is very important and they have had a responsible training period.”

The Dominican Republic’s history in men’s volleyball isn’t as well versed as the Netherlands (nor as their female counterparts) having only played in three FIVB events – the 1974 World Championships, and two qualifying events for the 2010 World Championships and 2012 Olympic Games. They peaked at 28th spot in the World Rankings in July 2011, equaling their previous best from 1997.

The matches start at 19:30 (local time) on Friday and Saturday.

WL: Netherlands is the new leader of...