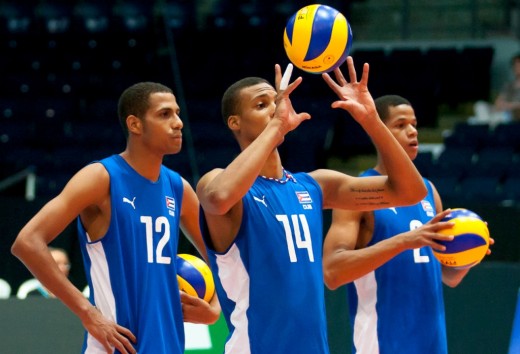 Finnish media report that they’ve been arrested under suspicion for committing a sex crime. Tomorrow, police in Finland will give more information about this case.

These three players were out of protocol for today’s game against Finland and our source told us that something happened with them.

They were at the hotel bar last night and what happened afterwards is a mystery. But, Finish television reported that police arrested him. We are trying to find out what really happened with these three players…

Cuban NT is currently in Finland, playing the matches of the World League Group 2.

WL 2016: Strong resistance from Belgium, Brazil will play in Krakow!

Arrested for sexual assault. Real shame for sport And fans.

Well, if you rape you get arrested. It´s simple like that.
When you come to civilized nation like Finland, you don´t rape and get off the hook like that.
btw. also fourth person from cuba team arrested now. What a vacation they think they gonna have, like somekind of fuckfest?

Dont worry, nothing happen in Finland if u rape someone. Maybe you get a ticket or 1 year a prison and normal that year is a conditional.

Now the police have eight players in custody.

Currently they are arrested under suspicion of aggravated rape. If they are found guilty, they’ll spend some of the next years in Finland. In addition rapists have a tought time in prisons.

@jojo no she wasn’t. Do not make things worse than they are by spreading lies.

They have 8 players in custody. The victim was an adult not a child as some rumours say. It’s an aggrevated gang rape in a hotel room in Tampere.
I wonder what kind of sentence they would get in Cuba, in Finland these punishments are wayyy too lenient.

@Trombi wayyyy too lenient ..foreign rapist, a Finnish jail ..they need 24 hours guards or they are not able to come out alive that jail

Well, Many people told me that Finish Police doesn’t like much immigrants and usually arrest them for anything, so it is kind of weird.

Finnish Police has been accused before of being not so happy for immigrants, so it wouldn’t surprise me that they arrest them just because they are not finnish.

I hope they are banned forever to play volleyball if they are guilty.

To arrest 8 Cuban players for rape? Hehe… Only in Finland. That sounds weird to me, there are many psyco girls in Northern Europe that loves to dictacte stories, just to get some attention.

The country that has to be banned is Finland, they just don’t like immigrants. They should be isolated.

Robert you bullshitter, the cops in Finland are goddamn angels towards everyone when compared to most countries. Even some refugees have said that Finland was the first place on their journey where the cops didn’t treat them like scum.