Switzerland: Kozuch, Grozer voted players of the year in Germany

Readers of volleyball magazines have voted Margareta Kozuch and Georg Grozer as Germany’s volleyball players of the year. 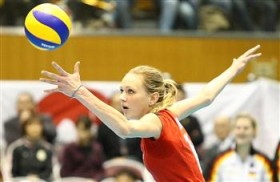 Kozuch, Grozer voted players of the year in Germany

The pair, who both earn their money in the Polish League, won their respective awards for the second year running.

They are key fixtures of the German national teams that are hoping to qualify for the 2012 London Olympic Games.

Kozuch polled 31 per cent of the vote, 4 per cent more than Angelina Grun, who in turn had more than double the number of votes of third-placed Christiane Furst.

Grozer also took 31 per cent of the vote, beating Bjorn Andrae by 3 per cent.

Third-placed Jochen Schops polled 19 percent of the vote and was followed by Lukas Kampa and Stefan Hubner.

“On the court, George loves tough situations and demands the ball,” Schops said of his Germany teammate. “He doesn’t like losing games and can be a very emotional guy.”

About Kozuch, fellow player Imke Wedekind commented: “Maggi was always a very cheerful and open-minded girl. She’s a person who meets challenges head-on and refuses to give up until she has achieved what she wants. She’s a strong personality both on and off the court, and not only motivates herself, but also others around her.”