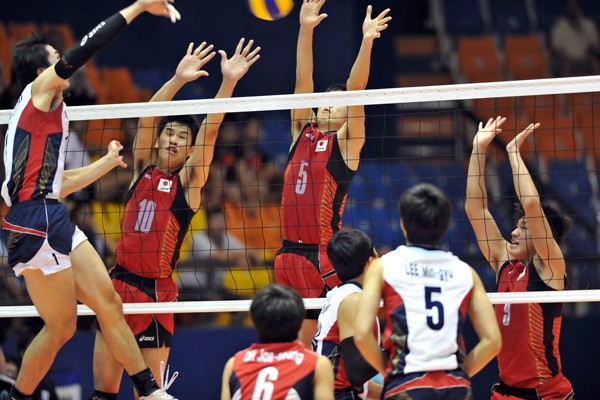 The FIVB world No.19 Japan, which captured the 2009 Asian crown and the 2010 Guangzhou Asian Games title, are in quest for the Asian Cup this time after they had nightmarish performances to finish last among the participating eight teams contesting the previous edition in Urmia, Iran two years ago.

Against South Korea, the third place in the 2011 Asian meet, the Japanese had to fight against the strong opponents and their nerve-wracking cheering enthusiasts. More than 600 Korean fans from Hanoi travelled to Vinh Phuc on Saturday to support their team. However, their fans had to leave the arena with heads low in disappointment when South Korea went down to the formidable Japanese in straight sets.

Japan opened up aggressively in the first set, with the 199cm-tall Takashi Dekita penetrating the Korean defence with his sharp, deadly spikes from the back court. The Japanese also played impenetrable defence allowing the rivals tough times to score. Jeon Kwang-In’s net-play aggression gave the Koreans’ fightback, but the Japan’s defence was just too good, playing every part of the game well to win the opening set 25-20.

Their confident went sky-high following the first-set win, Japan still took control in the second set despite the determined challenge from the rivals. High-leaping Tatsuya Shiota and the 207cm-tall Yamato Fushimi blocked well to give Japan the continued onslaught. Japan clinched the second set as expected 25-22.

The third set was more thrilling when the Koreans regrouped and hit back gallantly with an aim of making amends for the loss in the first two sets. As South Korea came close at 20-23, Jeon Kwang-In attacked devastatingly at the right wing to move his team to 21-23 before Gu Do-hyeon made it 22-23, thanks largely to his ace serve.

Locked in the tight contest, Japan remained in awesome form. Takashi Dekita’s fierce spike at the post helped his team advance 24-22, needing only one point to end the rivals’ challenge.

However, Sogo Watanabe was a bit nervous seeing his serve go wide, giving the Koreans another life to recover. After a few moments of rallies, Sogo Watanabe made amends for his mistake, producing a back-row attack which went unchallenged. Japan captured the hard-fought set 25-23 and the match.

Earlier, the curtain-raisers between Vietnam and invited Myanmar in the all-South East-Asians battle saw the host perform well beyond expectation to thrash error-prone Myanmar in straight sets 25-15 25-18 25-15 in just 66 minutes.

Bui Van Hai emerged as the top scorer for Vietnam after bagging 15 points for his team, with Win Tun Oo scoring the highest 13 points for Myanmar