On Thursday Austria will start their quest for a ticket to compete in the final round of the 2013 CEV Volleyball European Championship with a first round-robin taking place through Saturday at Budocenter in Vienna. 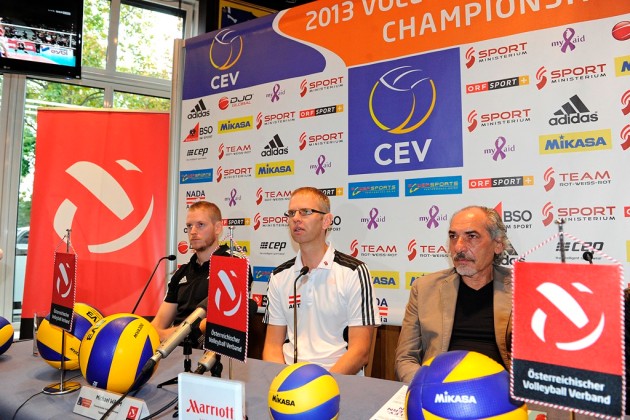 The home guys will open their campaign by playing the F.Y.R. of Macedonia, before they are challenged by Croatia and the Czech Republic. “They are equal to us and if we win the game, this would be a splendid start of our campaign” says team captain Oliver Binder. “We take it match by match and if we play our best, we can have our chances against all opponents”.

“I also think their level is similar to ours; our goal shall be to play with maximum intensity” adds head coach Michael Warm. “Croatia always had very good players but they have been rarely playing with the best roster. This time they have been putting together all of their best guys and even though this is a great challenge, I still think we can stand it. The same applies to the Czech Republic, as they also have got some outstanding players. We will try to respond with a solid performance, where our team work is fundamental”.

After Vienna, the teams will move to Ostrava and play there a second round robin to determine the winner of the group that will qualify directly to the final round taking place next year in Denmark and Poland. The second-ranked will have a last call next May via the third qualification round that consists of home and away matches.