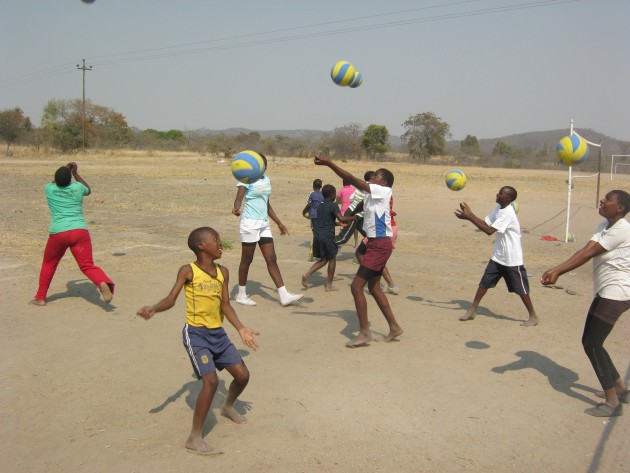 The youngest male athlete at the camp was 4 years old, and an eight-year-old was the youngest girl – in all, 37 children from across the district participated

A total of 37 athletes selected from the district’s six zones were brought to the centre to be trained in volleyball and life skills. The camp’s main objective was to introduce beginner athletes chosen under the talent identification programme to the correct methods of acquiring basic volleyball skills. But nine athletes outside the programme age groups were also allowed to take part in the camp as they are preparing for the national youth team try outs.

Centre of Excellence coordinator Joseph Ndabambi paid tribute to the local community for making the camp a success.

“Credit goes to the Mudzi community for the provision of food stuffs and the general support,” said Ndabambi. “It’s difficult to get children to converge at a place for a week away from home for sporting activities in rural Zimbabwe. The Mudzi parents should be congratulated for providing their children with an opportunity to fully develop their talents.”

In his closing remarks, Great Zimbabwe Volleyball Programme director Erasmus Mupukuta expressed his disappointment in the apparent lack of corporate support for the programme.

“It’s a pity that most of our corporates still think sport is athletics and football,” he said. “They have always been saying there is light at the end of the tunnel for the last 32 years. My challenge to these corporates is to support volleyball, where the potential is already plain to see.”

As part of the additional life skills training built into the camp curriculum, athletes were exposed to cooking using firewood, slaughtering and skinning goats and collecting water from the nearby river – which are all necessary survival skills in rural Zimbabwe. Athletes also had lessons on Drug Abuse with learning materials supplied by Foundation for a Drug Free World.

The Great Zimbabwe Talent Identification and Development Programme is the Zimbabwe Volleyball Association’s solution to volleyball’s ailing stature. The sport does not enjoy the status it deserves as a successful mass sport due to a lack of properly managed and coordinated player development, among other factors. This is despite the many medals won at international competitions, the latest being gold in beach volleyball and two medals in volleyball a fortnight ago in Windhoek, Namibia.