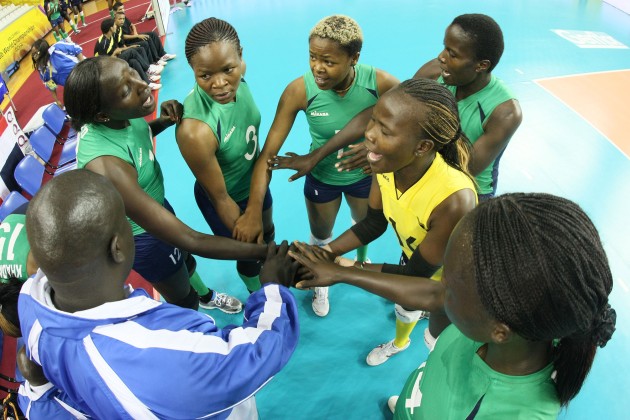 The victory means Prisons have completed the league on clean sheet having won all their 14 fixtures they played this season (2012) in the eight-team national women’s competition.

Prisons who are both reigning African and Kenyan champions will therefore go into four-team play-offs which are scheduled for early November as league leaders since they have recorded unassailable 40 points.

The remaining berth will be filled after the seventh and final leg of the Kenya Volleyball Federation National league which will be played in Eldoret on October 5. Nairobi Water and Ulinzi are main contenders.

With a lot at stake, the match between Prisons and Nairobi Water provided exciting moments especially in the last two sets where the later fought hard to contain the more experienced wardresses.

Prisons with help of hard hitters like Everline Makuto, Mercy Moim, Bracksides Agala and Diana Khisa took the game to Nairobi Water in the opening set which they easily won 25-9.

Nairobi Water knew very well that they needed to win the match to seal a play-off slot and so they opened the second set with focus and Mereze Anyango’s successful blocks on Khisa and Eliza Melly’s back court attack handed them 2-0 lead in opening minutes of the period.

Nairobi Water then extended the lead to four points at 4-0 and then 6-1 before Prisons regained composure and fought hard to narrow the gap to single point at 16-15. Prisons then exploded with characteristic powerful attacks from Agala, Moim, Lydia Maiyo and Makuto to score quick points and claim the second set at 25-18 but not without resistance from Nairobi Water’s combination of Anyang, Ndiema Chemtai, Ruth Chelagat and Rose Wangari who gave as much as they received.

The third set started on high note with Nairobi Water scoring two quick points to take 2-0 lead and commanded the proceedings at 13-11 before Prisons cruised past them to win the set 25-18 and wrap up the match with 3-0 sets.

Nairobi Water coach John Mwaniki conceded that Prisons were the better team as he said: “We’re our best but they proved to be better than us. My players didn’t receive well and that’s where we lost the match.”

Prisons coach David Lung’aho said: “What makes me happy is that we have completed the league without dropping a match.”

“Our focus now shifts to FIVB World Clubs Championships which will be held in Doha, Qatar on October 13-19 and thereafter we return home to defend our national title during play-offs”, he said.