Dominican Republic won the Bronze medal in the Pan American Cup U23 for men. Canada was the runner up. Worldofvolley brings you the statements from the participants of the Bronze game. 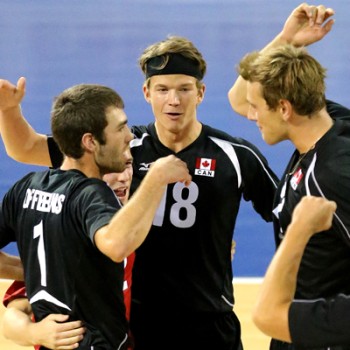 “The Dominican Republic played a great game today. They were much more prepared for us this time around. They executed well. They took it to us and we fell apart in different parts of different sets”, Canadian captain Jarrod Offereins mentioned.

“Winning this medal means a lot for us. We really wished it and wanted. Now we have another competition in november, and this will help us a lot”, Dominican captain, Wilfrido Hernandez remarked.

“I want to congratulate Canada, because they played five matches that were very demanding for them in the tournament. They had to play at full”, said Osiel Vazquez, coach of Dominican Republic.

“I feel happy for my athletes, because we achieved the goal of winning a medal, and worked a lot with our service sending all the balls against their number nine (Bradley Kufske) as part of our tactical plan and it worked”.

Canada’s coach Ben Josephson stated that it was hard to beat a good team twice in a row. “The first night we got a win and probably surprised them”, he said. “We weren’t able to get much going until the third game. Credit to the Dominican Republic coaching staff and players for cleaning up the things we did well last game.”