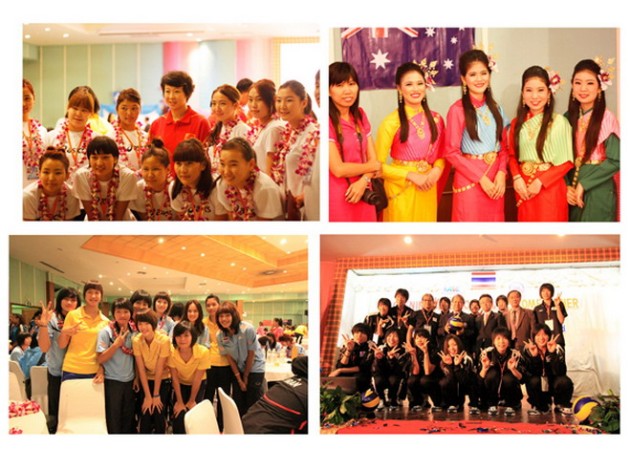 The competition serves as the Asian qualification event for the 2013 FIVB World Junior Women’s Volleyball Championship in Czech Republic. This will be the first edition which offers four tickets for the Asian countries to contest the 20-team world meet.

The participating teams comprise New Zealand, Iran, Kuwait and hosts Thailand in Pool A and Mongolia, India, Vietnam and defending champions China in Pool B.

The group round-robin preliminaries will take place simultaneously from October 1 to 3 at both Nakhon Pathom and Ratchaburi Gymnasiums.

The FIVB world No. 1 China, reigning and nine-time champions, will open their title defense against Mongolia in the curtain-raisers in Nakhon Pathom. Among the 16 participating teams, the Chinese players have the best height average of 186cm, with the 193cm Xu Ruayo emerging as the tournament’s tallest player.

Japan, the FIVB world No.7 and five-time champions, sent a strong team with not so tall players, but the team are known for their stubborn defence and never-say-die attitude. Kaori Ueno, standing 180cm tall, is the team’s tallest player. Japan are due to take on Australia in their first-round match on Monday in Nakhon Pathom.

Hosts Thailand, whose best performance in the Asian meet was the second place in 2002 in Ho Chi Minh, Vietnam, have their sights firmly set on the top four in this episode on home soil. They are scheduled to play Iran in their first clash in Ratchaburi.

“We are fortunate to have a comfortable draw in Pool A. I’m now thinking about the last eight teams which will allow us more difficulties. However, to make a cut for the next year’s world meet, we have to finish among the top four. Therefore, I have targeted my girls to make it to the semi-finals,” said Nattapon Srisamutnark, who steered his side to win the last week’s South East Asian Junior Women’s Championship in Nakhon Pathom.

“My team’s reception is still below 80 per cent standard and if we need to make it the top four teams, we have to mend the receiving tactics. Our performance in the Asean meet was quite okay, but to match much stronger teams such as China and Japan, we have to play with more aggressions and varieties. However, playing on home soil, I’m upbeat my girls will have their dreams of advancing to the semi-finals fulfilled,” he added.

On Sunday evening, the general technical meeting was held at the Whale Hotel in Nakhon Pathom, with team managers, head coaches and representatives from 16 participating teams taking part. The meeting was followed by the welcome party and the opening ceremony. Somporn Chaibangyang, president of the Thailand Volleyball Association, presided over the ceremony and presented souvenirs to all participating teams.