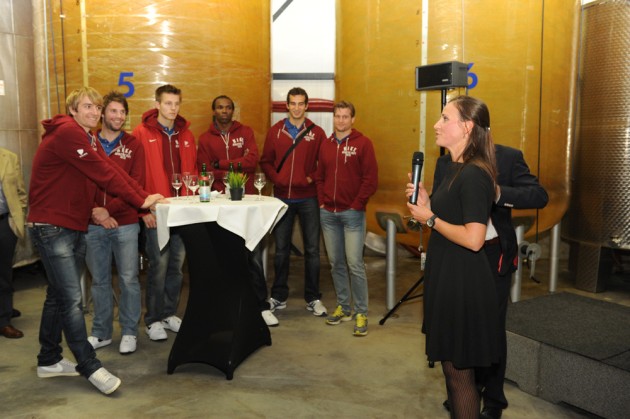 Sponsor Baeten Vinepolis hosted officials, players as well as representatives of the media in the premises where wine is being stored in barrels that have a capacity of 20 liters.

“Our main goal is to remain the best team in Belgium” said a determined head coach Brecht Van Kerckhove. “We have already claimed the Supercup some ten days ago and our intention is to go for additional titles in the national league and Belgian Cup. I am happy that some of our rivals have strengthened their rosters so that we can expect some interesting and close matches. Together with Precura ANTWERPEN, our closest rivals and challengers shall be Knack ROESELARE and Euphony ASSE-LENNIK that will also participate in the CEV Volleyball Champions League”.

Noliko is participating in Europe’s most elitist competition for the thirteenth consecutive year and was assigned by the DOL to preliminary Pool F together with Turkey’s Arkas IZMIR, CAI TERUEL of Spain and Bulgarian rookie Marek Union-Ivkoni DUPNITSA. Very close matches are expected especially since Arkas advanced to the final four finishing fourth this past March in Lodz while CAI TERUEL recently opened the domestic season in Spain by claiming the Supercup. The young guys from DUPNITSA will surely want to display their talent and potential in front of the European audience.

Noliko hopes to finish first in the group to have a good draw for the Playoffs 12. The players share the same ambitions revealed by their head coach. “It is great to play at this level and it is the perfect stage that any Volleyball player may wish to get” says Dutch middle blocker and newcomer Lars Lorsheijd.