Host China overwhelmed Hong Kong in three sets to emerge on top of Pool A at the 2012 Asian Youth Girls’ Championship. Hu Mingyuan had the most markers in the match with 10. 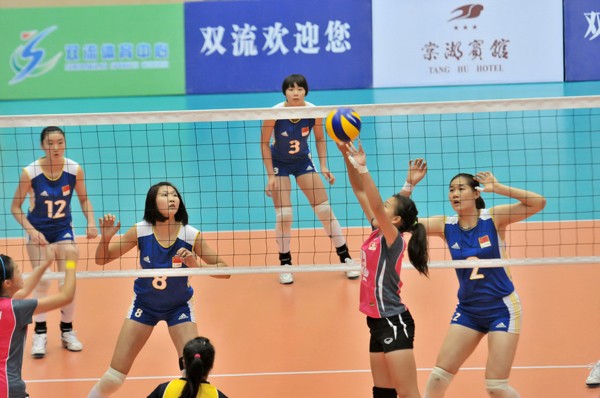 Apart from their clear advantage in height and competition experience, China threatened the competition’s newcomer Hong Kong with powerful serves in the match at the Shuangliu Sports Center. The Chinese girls reaped nine service aces in the first set alone, to close with a score of 25-6.

China started to rely on substitution in the second set. But Coach Dong Ruijun’s bench players were by no means inferior. Du Qingqing, Wang Yuanyuan and Sun Haiping stepped up to maintain China’s control and rhythm.  The use of substitutes not only showcased coach Dong’s deep bench, but also his wide array of reliable offensive options. Orchestration was done superbly as every Chinese player made it to the scoring charts, but starter Hu Mingyuan had the most markers in the match with 10.

A similar story told the third set where the Chinese dominated in attacks that belittled Hong Kong’s restrained spikes. Rallies were hardly maintained as the Chinese attackers always managed to smash the ball without any hope for the opponents’ decent reception.

Meanwhile, the Hong Kong girls maintained their spirited play as newcomers in tournament. They rejoiced every precious point they gained in brazenly challenging the powerful Chinese players. Captain Chow Yinlam Natalie even managed to outsmart the Chinese receivers with four service aces in the match.