Haiti secured a spot in next year’s qualification phase by defeating Guadeloupe 3-1 to improve to a 2-1 win-loss record at the NORCECA-C First Round Tournament. Yves Larrieux, Ismael Olivier, and Loic Couchy gave their statements. 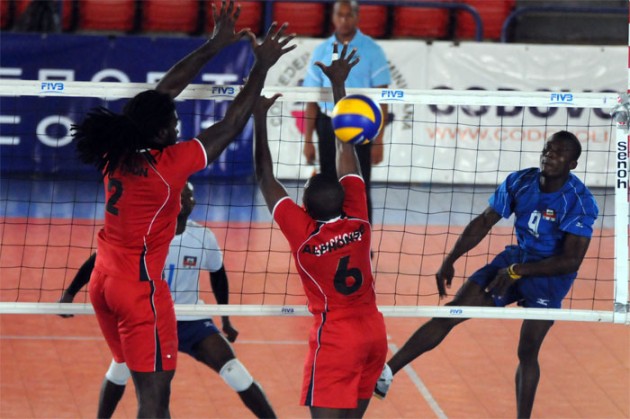 The victory guarantees the winners one of the two top places in the competition where the top-three teams advance to the second round.

Haiti will play with hosts Dominican Republic (2-0) for the first position later today while Guadeloupe (1-2) take on U.S. Virgin Islands (0-2) for third place.

Frantz Joseph, captain of Haiti, led his side with 15 points, including three blocks while Emmanuel Mabou added 14 with four aces.

Xavier Galipo was the best scorer of Guadeloupe with 13 points while Ludovic Baltyde and Alexandre Watson each had 9 points.

“I think our team played good volleyball today because my players decided to apply the information they received”, Haiti’s coach Yves Larrieux stated. “I am happy about qualifying to next round and hope to play hard in the final match.”

“I expected to win the match because the qualification is very important for our volleyball”, Haiti’s captain Joseph said.

“I am disappointed with the loss”, Guadeloupe’s coach Ismael Olivier said. “Maybe when we play in the morning we don’t play our best. Now we have to look for the third place match and to keep the motivation.”

“I was hoping to win but we didn’t play good volleyball”, Guadeloupe’s captain Loic Couchy stated. “Maybe the match was too early and it was in our heads. We have to win our next match, I don0t know how but we have to win.”

EXCLUSIVE FOR WoV – Kelly Murphy about...