Atom Trefl SOPOT also contributed some special Christmas gifts to their fans. They recently joined the studio of a local radio and there they recorded their personal version of “Wonderful dream”, a Christmas song by Melanie Thornton. 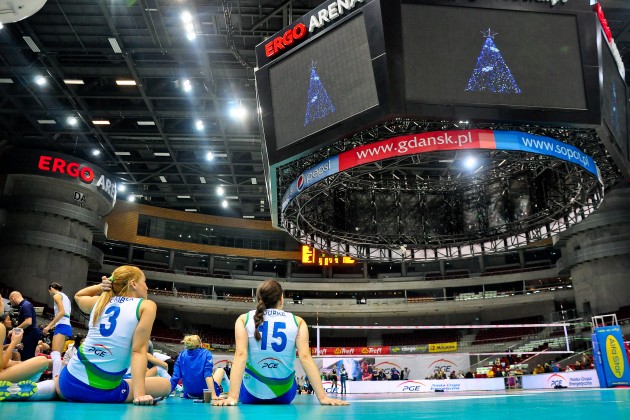 “It was a very nice experience” says libero Mariola Zenik. “As you can see from the video, we had a lot of fun. Maybe we are not very talented but it was a pleasure for us to record this song”. Even though they were evidently tired after the busy schedule they have gone through in December, still the players showed a very professional attitude by re-recording some sections of that song in order to improve the quality of the sound as well as of their vocal performance. “It was a very different but also fantastic experience for all of us who had never been in a recording studio. We laughed a lot but we also wanted to sing the best we could” adds Dorota Wilk.

It took three hours to record the song by alternating choruses and solo performances by some of the players. Since they were suffering a sore throat, Anna Podolec and Klaudia Kaczorowska could not join this action. Once the recording was completed, the players moved to the centre of Sopot to attend a special winter funfair and this weekend were in attendance for a fan action in a shopping centre in Gdansk.

The song and its video were presented this Saturday after the much-contested match with Tauron MKS DABROWA GORNICZA. “I really enjoyed it even though I was not particularly happy with my solo” says Zenik with a smile. “I think that the fans should evaluate the video once they are on their own. I still hope we won’t make anyone deaf” adds Wilk.

POL M: Results from the 13th round