On Friday, the players of the club from Doliną Popradu will resume with the trainings after the holidays. 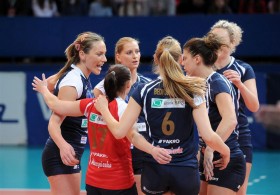 Most of the Muszyninaka players are gone

Muszynianka squad for next season is not closed yet, and in a month they will declare the name of the new partner of the club, which will support a third team in ORLEN League.

In this summer’s transfer window Muszynianka Muszyna has undergone a revolution. Most of the players from Bogdan Serwiński‘s team that represented the strength of the squad from Doliną Popradu are gone.

Compared to last year’s composition, only Aleksandra Jagieło and Paulina Maj decided to stay in Muszyna. The he club is still looking for two players. As coach of Muszynianka said, the board is interested in acquiring the opposite and the receiver.

Meanwhile, on Friday, Bogdan Serwiński’s team will begin with preparations. Only eight players will be on the first practice, as Paulina Maj and Ivana Plchotova will stay in the camp of the national team. First one with Poland and the other one with Czech Republic.

Multiple Polish champions at the beginning of the preparations will go for a week to the training camp to Solec-Zdroj, before the start of the tournament in Jarocin.

As Serwiński revealed, there is a good chance that in September they will know the name of the sponsor, who will support the team from Muszyna in the future.

To read more news from this competition, click on Poland.

See the profile of Muszynianka.