Polish team completed their participation in the European Championships in 2013 after being defeated against national team of Italy. 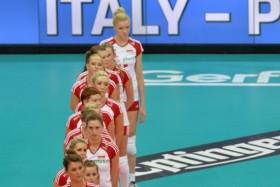 At the final classification of the tournament the Poles won 11th position, which is the worst performance of their national team for more than 25 years, since 1987.

Polish players left “Hallenstadion” in Zurich, tearful. They survived a fall out of the championship and the terrible style of playing against the Italian national team.

It is, however, not surprising, because since the beginning of the tournament they played unevenly and often with more heart than skill.

Eleventh place in the European Championship is the worst result of the Polish team from the tournament in Belgium in 1987. Poland then also took 11th position. Most of the current Polish players were still toddlers in 1987, some of them not even born.

Since 1987 Polish team has gradually climbed in the European hierarchy. In 1995, in the Netherlands they were ranked ninth. After the next tournament the winning streak of belonging to the European leaders has started. For eight consecutive championships Poland has always played in the quarter-finals.

At the time, Andrzej Niemczyk led the team to the European Championships twice (2003, 2005), Jerzy Matlak (along with Piotr Makowski) won the bronze in 2009 in front of the Polish audience. In 2007, the team led by Marco Bonitta turned fourth, but since then the results have been slowly getting worse.

POL M: This is why Mariusz Wlazly...