Tauron MKS DABROWA GORNICZA – one of two teams representing Poland in the 2014 CEV DenizBank Volleyball Champions League – signed at the end of October a contract with Turkey’s setter Özge Cemberci Kirdar. She was a member of VakifBank ISTANBUL by the time this side won Europe’s elite club competition in 2011. 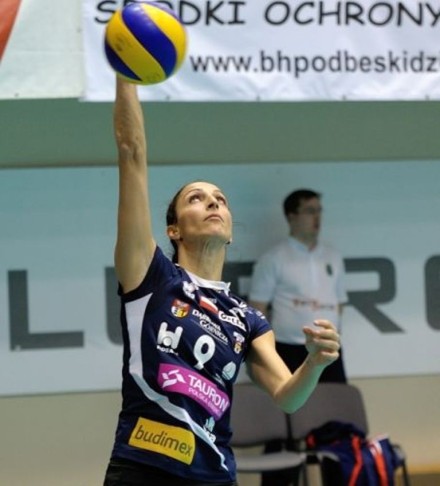 “This is the first time I am playing abroad and that I am far away from home. This is a real challenge for me” she said after her arrival in Poland. She immediately joined the training sessions of her team and had a couple of individual practices before traveling to Bielsko-Biala for her first match in the national league against BKS Aluprof.

She played two sets there and she anchored her team to an away victory. “She had a very difficult task in Bielsko-Biala because she did not know the team at all” stresses Tauron MKS head coach Waldemar Kawka. “I think she nevertheless was able to show some good actions but we still have to wait to assess her performance and her role a little better.”

On Monday – as Tauron MKS lost 2:3 to Impel WROCLAW – Cemberci played her second game in the league and this time she joined the actions from the start up to the end. Not only the coaching staff but also the players of Tauron MKS are happy with her addition to the roster. “I hope this will work better and better as she gets familiar with the team. Apart from her, we have another two setters, Anna Kaczmar and Marina Katic” stresses wing-spiker Joanna Staniucha-Szczurek.

Özge Kırdar Çemberci – whose twin sister Gözde Sonsirma Kirdar currently plays for VakifBank – is a very experienced player who has already set very high goal for her first season abroad. “I want to help the team as much as I can. My goal is to help Tauron MKS win the national cup as well as the national league” she says.