POL W: Atomic girls have something to prove!

Only a couple of matches are still to be played to complete the regular season of the Polish women’s national league sponsored by ORLEN. After they suffered a setback in the last round where they lost in three sets to Polski Cukier Fakro MUSZYNA, reigning champions Atom Trefl SOPOT are now set to play Palac BYDGOSZCZ and Siodemka LEGIONOWO. 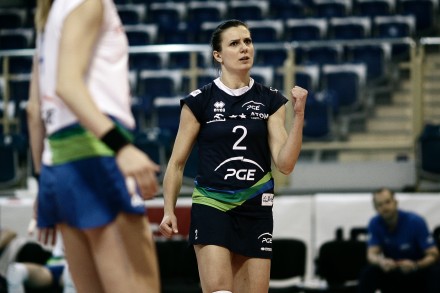 “I thought Eczacibasi was an opponent that we could beat but some small details decided the outcome of this double-header” says Atom Trefl opposite Anna Podolec. “We made some little mistakes especially there in Istanbul, so in the end they got the right to progress to the next round. We only can be angry with the way we performed here in Sopot. We were too nervous. However, this is history now and we have to stay concentrated on our next matches in the national league.”

After the Playoffs 12 matches with Eczacibasi, SOPOT first beat Beef Master Budowlani LODZ in straight sets before losing their last game to MUSZYNA (0:3). “In my opinion this was one of the worst matches we played this season so far” says team captain and setter Izabela Belcik, “if not the worst of all.”
“This can happen but we mainly lost because of our poor performance and this makes us very angry” adds libero Mariola Zenik.

The Atomic girls want to show their real value in the next matches where they will cross their ways with Palac and Siodemka. “We still can’t forget the matches we played with Eczacibasi but every game we play in the national league helps us getting back the necessary self-confidence. We will try to keep our second place in the standing by the time the regular season comes to an end because we already know that Chemik POLICE is anyway going to top the charts” stresses wing-spiker Charlotte Leys. “It does not really matter who your next opponent is, but that we win every game we are set to play. We are ready to fight. The only positive thing resulting from the end of our campaign in the Champions League is that now we have more time to rest, practice and prepare for our matches.”

Leys still feels some disappointment for these two losses to Eczacibasi. “The home match we played here in Sopot was a disaster. We all were tired after playing the World Champs qualifiers at the beginning of January. We immediately came back to Sopot, traveled to Bielsko-Biala for another important game and then we had the home match with Eczacibasi. We lost twice but we definitely improved when we played in Istanbul. I am happy because in the second game we showed a good performance to our fans. It was not a one-sided match like the one we had played here. Still this is history now and now we have to play our best to win the national league as well as the national cup here in Poland.”