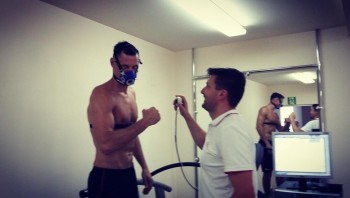 Two more clubs from the PlusLiga started with work this Tuesday. The reigning champions Asseco Resovia gathered its troops for the first time in new season. Operation – Defending the title – began with nine players in the roster who underwent medical exams, while the first training is scheduled for Wednesday.

Alexandar Sliwka and Thomas Jaeschke will join them at the end of the month while the team will be complete after the European Championship when Piotr Nowakowski, Fabian Drzyzga, Bartosz Kurek, Jochen Schöps and Nikolay Penchev return to Rzeszow.

Meanwhile, Ferdinando De Giorgi had his first ever training in Zaksa as the team’s new head coach. He can currently count on players – Grzegorz Bociek, Jurij Gladyr, Grzegorz Pająk, Krzysztof Rejno, Kamil Semeniuk, Sławomir Stolc, Łukasz Wiśniewski and Dominik Witczak, while the others will join later on.

PHOTO OF THE DAY: Klos is a bit taller than the organizers expected…