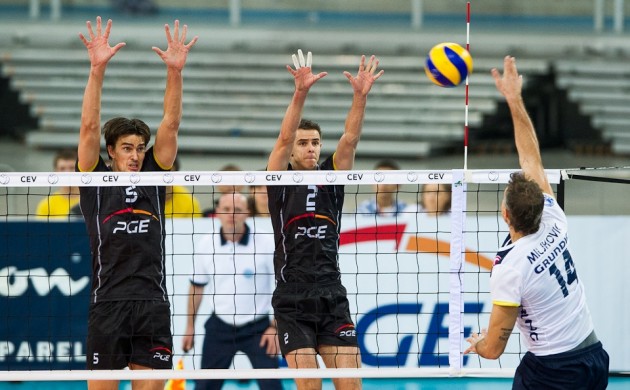 Poland’s vice-champion dominated the scene from the start up to the end thereby claiming a very important result especially since Pool E – that comprises also Dinamo MOSCOW and Tomis CONSTANTA – is seen as the toughest in this year’s edition.

For PGE Skra it was the first appearance in Atlas Arena since the memorable final of the 2012 CEV Volleyball Champions League. However, this time the result was much more favorable after the local heroes had lost the final act of the past edition to Zenit KAZAN at the end of a real thriller.

Daniel Plinski was the man who started the show. He scored the first point and with a series of good services secured a comfortable lead for PGE Skra. The Polish middle blocker turned out to be one of the key players in the first set when he blocked Ivan Miljkovic, to let his team go for the second technical time-out with a margin of three (18:15). The players of Fenerbahce were taking many risks from the serving area (8 errors in the first set) and they eventually drew level at 22 before Wytze Kooistra blocked Matej Cernic and the PGE Skra second lines did a great job in the final moments. On the Turkish side of the net only Leonel Marshall and Ivan Miljković showed a good performance in attack scoring 4 and 5 points respectively.

Mariusz Wlazly and Michal Winiarski starred in the second set won by the home team with a margin of 11 points. They served perfectly and added points with their attacks and blocks scoring respectively. As they stopped Miljkovic for the 18:9 lead in favor of PGE Skra, 10’850 fans erupted in ecstasy. Nobody from the yellow-and-black crowd watched the match sitting on their chairs, as even the “Mexican wave” accompanied the actions of the local heroes. In this set PGE Skra served 5 aces, making only 2 errors in this fundamental.

However, Fenerbahce showed great fighting spirit in the next phase of the match. The four-time Turkish national champion managed to stop Aleksandar Atanasijevic and took the lead at 14:11 with a tremendous contribution by Ivan Miljkovic who was given good support also by Cuban Leonel Marshall. However, even the greatest player cannot win the match without the help of his team and the Serbian opposite of Fenerbahce finally made two mistakes and was blocked by Mariusz Wlazly. Some points by substitute Dejan Vincić and powerful serves by Atanasijevic gave PGE Skra the lead at 19:17. Fenerbahce fought back and earned 2 set points, however the final rush belonged to the home team, and short setter Pawel Woicki, who scored his third block, contributed the first match point for his side. A mistake by Ivan Miljkovic (eventually the best scorer of the match with 15 points) ended the game.

“We were not the favorites coming here; however, we could have played much better. PGE Skra proved for the next time that they have a very strong team. We were close in the first and third set, but made simple mistakes, which cost us the match” Miljkovic stated. Leonel Marshall scored 10 points for Fenerbahce.  “We could not receive well and it was very difficult to organize our offensive play. I am pretty sure that we still can qualify for the Playoffs. We lost only the first battle” added Arslan Eksi, Fenerbahce setter and captain. Daniele Bagnoli could not agree more with his captain: “The match lasted for us only for two sets, but in the first and third we got our chances. We just made too many mistakes in the decisive moments. Our attacks went out and this cost us the match. We go back home with no points but convinced that we can do better in the next matches” the Italian coach stated.

“I am just very happy with the way we served and the way we were prepared tactically. We managed to stop Marshall and Miljkovic; we were determined and very enthusiastic. I am proud of my team” home coach Jacek Nawrocki stated. Five of his players scored 6 or more points, Winiarski (10), Atanasijevic (11) and Wlazly (12, best scorer for the winning team) finished in double digits.
“It was just a good performance in a really tough match, a good start in a difficult competition. It was a great pleasure to play in front of our audience, like always. We are happy, and we made people happy” Wlazly stated.