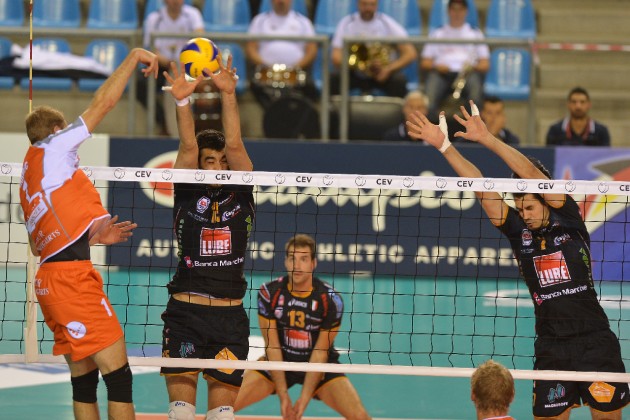 The Belgians were not able to cause a sensation and the Italian powerhouse scored a 0:3 away win (17-25, 22-25 and 22-25).
The domination of MACERATA was ocular in the first and third set. Euphony was not yet in their best rhythm and the visitors with their superstars Cristian Savani and Ivan Zaytsev started really concentrated and controlled the game in the first set going for a relatively speedy 25-17.

In the second set ASSE–LENNIK played its best and showed less fear for such a decorated and strong opponent. It immediately came out strong (4:3) and after a 13-10 lead for the Belgians, a series of good services by Sasa Starovic turned the score around (13:16) as MACERATA took the control back in its hands and pulled out a nice final rush. With good attacks by Jozef Piovarci and Dejan Radic, the home crowd had some hopes for a good result but Euphony could not avoid the 22-25 for their opponents.

In the third set it looked like MACERATA was going to finish the game quite quickly, but Euphony came back as the Italians dropped their concentration. So the boys coached by Marko Klok made a final sprint eventually losing that section of the game with the score of 22-25.

CL W: Hot favorite Rabita lives up to the expectations in Prostejov