Poland’s Bank BPS Fakro MUSZYNA claimed on Thursday the first semifinal match of the 2013 CEV Volleyball Cup by edging the hosts of Omichka OMSK REGION at the end of a dramatic game 3:2. Read latest volleyball news on Worldofvolley.com. 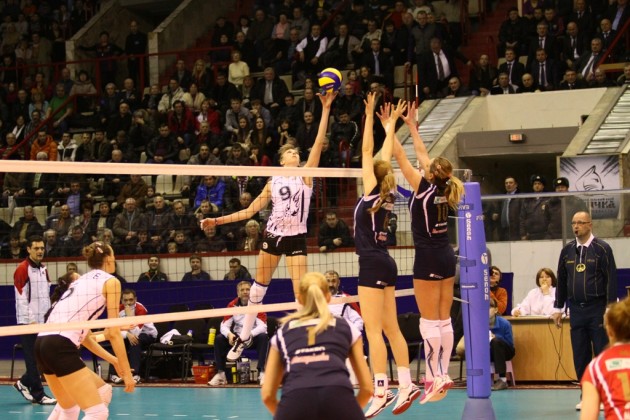 This was the first home defeat suffered by Omichka since the club debuted in the European Cups back in 1994. The return match is scheduled for February 14 in Poland and Omichka will try to call for the golden set there in order to make it to the final stage of the competition. Before they travel to Poland the players of Omichka will play on Sunday rookie TYUMEN-TyumGU in the Russian Superleague.

The start of the game was very close with MUSZYNA enjoying the slimmest margin by the first technical time-out; as the guests scored the next three points, Omichka head coach Zoran Terzic asked for a break and his players responded well by leveling the score at 11 all. Omichka could gradually impose their pace and even though Bank BPS Fakro could reduce their gap to only two points, the hosts pocketed the opening set with the score of 25-21.

Omichka kept momentum also in the early phases of the second set with every action of the home heroines being accompanied by the loud cheers of their fans. However, it was MUSZYNA that got to the front at the first technical time-out (8:6) and Omichka gradually lost composure, with the Poles going up by five halfway through the set (16:11). Although Natalya Mammadova and libero Viktoriya Kuzyakina displayed some good actions for the home side, they could not prevent their opponents from seizing the set (19-25) and going for the provisional 1:1.

Omichka could finally set the pace of the game by the first mandatory stop of the third set (8:6) and even though OMSK went up 10:6, still MUSZYNA fought back on good serving by Sanja Popovic. World-class Volleyball was being showcased in that section of the game before Hélène Rousseaux could not control her nerves in the so-called money time. Some errors by the Belgian spiker did help Omichka move up 24:22 and although MUSZYNA drew level at 24, the Russian side could cash their next chance for the 2:1 (27-25).

Omichka got off to a flying start in set 4 (6:2) but MUSZYNA was quick in clawing back moving to the front by the first technical time-out (8:7). As his side was trailing 15:18, Polish mentor Bogdan Serwinski asked for a break but Omichka could still keep a margin of three heading into the final rush (21:18). Quite incredibly MUSZYNA fought back once more (23 all) and could call for the tie-break by cashing their second set ball (24-26).

MUSZYNA imposed their quality in the last set opening with a 5:1 run but Omichka responded well by leveling at 5 all. After the teams changed sides of the court, MUSZYNA went up by three points and even though Omichka fought until the end, it was Bank BPS Fakro that could celebrate in the end (12-15).

“It was a high-quality game and both teams showed off their potential” says Omichka team captain Olga Sazhina. “It was very difficult to play this opponent since they could save many balls and they had many different options in attack. However, I am confident we can play our best in the next game”.

“The game was absolutely balanced; as we were leading, they fought back and we did the same as they went to the front. This match shows that you have to stay fully concentrated from the start up to the end when you play teams that have competed in the Champions League” added top scorer Natalya Mammadova, who registered 30 points in this losing effort.

“I have to congratulate our opponents on their victory. I am sure the fans enjoyed this game but I can’t say this for myself. We have an opportunity to make it to the final via the return game and we will try to exploit it” stressed home mentor Zoran Terzic.

“We are evidently delighted with the result as Omichka is a strong team with very good players. However, we have to forget this game and get ready and concentrated for the return match in Poland” said Bank BPS Fakro team captain Aleksandra Jagielo.

“We still have another game that will be very difficult and we need another win to advance to the final. We have to play our best to beat Omichka once more and achieve our goal” concluded Polish head coach Bogdan Serwinski.