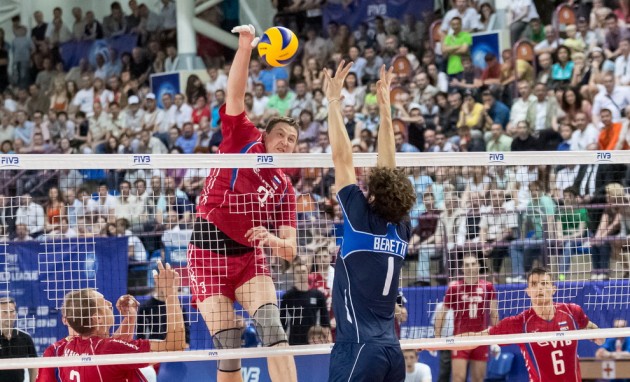 Italy started well, with Cristian Savani and Ivan Zaytsev attacking superbly, and had a three-point advantage at the first technical timeout. Russia’s Nikolay Pavlov helped tie the score at 11-11, forcing Italy coach Mauro Berruto to call for a timeout. Italy fought back and closed the set out, 24-26.

In set two, Italy surged ahead, but Alexey Spiridonov and Nikolay Pavlov’s spikes helped to bring some Russian stability, and the score levelled at 14-14. Italy continued to battle at the net, but Russia stormed ahead to take a slight lead 22-21. The teams traded the points in a determined fight, and eventually Russia finished it 30-28. 1-1.

The visitors made a good start in the third set, and their hitting power gave them a 10-8 lead. Russia didn’t manage to break the Italian rhythm, and Andrey Voronkov’s team needed a timeout to regroup. But Italy had answers to all Russia‘s attacks, and won the set 25-20.

Russia fought well again in the fourth set, but with Ivan Zaytsev on fine form, Italy‘s effective spikes put them 16-13 up, and they held on to clinch the set 25-17, and the match.

Ivan Zaytsev was the match’s top scorer with 28 points for Italy. Nikolay Pavlov earned 15 for Russia.

Undefeated Italy are top of Pool B with 14 points, Russia are now second with 11 points. The two sides meet again at the same venue, Energetik, on Saturday.

WCHJ W: Egypt jump out with straight-set win over Algeria

WCHJ W: Serbia’s debut is a 3-0 match against Colombia