RUS M: Vladimir Alekno: One game – not an indicator

Immediately after the victory of "Zenit" over the "Ugra" the head coach of national champions and national team of Russia Vladimir Alekno summed up the game and assessed the prospects of his team in the upcoming "Final Four" of the Champions League in Lodz. 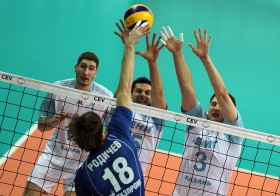 – Your team didn’t had too much problems defeating Ugra, which is in 1/8 finals knocked out of the favorized “Belogorie”?

– One game is not an indicator. If you remember, “Ugra”  lost against ‘’Belogorie” in the first match with result of 0-3. And then took the series of two games in a row. So I expect our next meeting in Surgut very hard struggle.

– Early knock out of  “Belogorie” from the playoffs became a sensation for you?

– Belgorod was in a difficult position for a whole year, they have constantly injured players, so much burden was placed on a Tetyukhin . It was difficult to sustain the season in the rhythm like that …

–  Are you upset that the “Lokomotiv” from Novosibirsk was unable to follow the example of “Zenit” and reach the semifinals of the Champions League, losing in Izmir against “Arkas”? By the way, because of this you have to face the first day of the tournament in Lodz not the “Lokomotiv”, but the Italian “Trento” …

– It’s disappointing that will not be Russian semifinal. But we cannot change it. We must prepare for the “Trento”. This team won the Champions League in the previous three seasons. However, this fact does not reduce maximum problems faced by “Zenith.” We will fight to the end. As President of our club Rafkat Kantyukov said, “undefeated contenders for ” Zenith “does not exist.”