After edging DRESDNER SC on Wednesday, Russia’s rookies Omichka OMSK REGION will be trying to finish the prelims of the 2014 CEV DenizBank Volleyball Champions League – Women atop the tables in Pool A as on Tuesday they host last year’s silver medallists Rabita BAKU of Azerbaijan for the last round of action. The organizers expect that more than 4,000 fans will come together at the “V. Blinov” sports complex for the much anticipated game with Rabita. 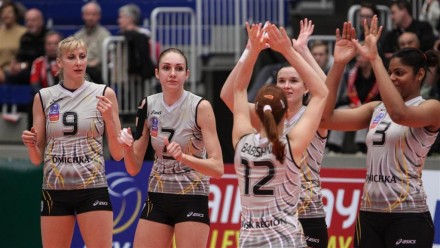 Omichka and Rabita already crossed their ways some weeks ago as BAKU claimed the first match of the prelims cruising past the “Cats” at the tie-break. After that Omichka swept four straight matches playing twice BEZIERS Volley of France and DRESDNER SC of Germany, thereby pocketing 13 points, only one less than their opponents from Azerbaijan.

If they seize the night on Tuesday, Omichka will finish the prelims in first place but if they “only” edge Rabita at the tie-break, the point quotient will have to be calculated in order to determine who finishes first and second in the Pool.

Omichka has played 9 matches so far with teams from Azerbaijan, with their win-loss record standing at 5-4. The players from Siberia’s second largest city have a great record when it comes to their home matches in the European Cups. Since the 2008/2009 season where they returned to compete internationally under the name “Spartak”, OMSK REGION has won 13 out of their 14 home matches, quite a good omen for the upcoming clash with Rabita.