NOVOSIBIRSK, Zenit KAZAN and Lube Banca Marche MACERATA will be going on Wednesday for yet another “clash of the titans The capital of Tatarstan will host another world-class Volleyball match. After edging last year’s champions Lokomotiv” to determine the team that finishes first in the standings of Pool E. The hosting club of Zenit KAZAN will donate the money resulting from the tickets sold for this much anticipated clash to a special centre that is taking care of disabled children. 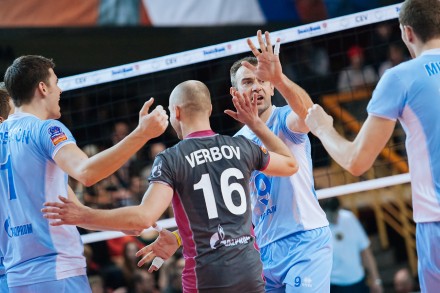 Last week Zenit claimed the Russian derby with Lokomotiv (3:1) thereby taking their revenge for the defeat they suffered in last year’s semi-final in Omsk. Zenit and Lube Banca Marche MACERATA could eventually find their way to the Playoffs 12 from the so-called “group of death” and are certainly among the sides who have a shot at the title that will be at stake in March.

Zenit KAZAN and Lube Banca Marche MACERATA were crowned Russia’s and Italy’s national champions in 2012 and they currently top the charts of their respective national leagues with a perfect record. The guys from the capital city of Tatarstan scored their sixth straight victory in the competition last Saturday as they beat Dinamo MOSCOW 3:1.

“Recently we have had problems to seize the day in straight sets, we have experienced this problem for four matches in a row now” says Zenit KAZAN libero Alexey Verbov. “It is a real challenge for us and we must do something. Anyway, the key thing is that we keep on winning our matches. We will try to extend our winning streak on Wednesday as we play Lube Banca Marche MACERATA as we want to take first place in our Pool” he continues.

Verbov and Alexander Volkov have both finally recovered from their injuries and will be available for the coming game with MACERATA. As for MACERATA, they just won their seventh consecutive match in the national league by easily routing Bre Lannutti CUNEO in straight sets.