As part of an end-of-year review series, www.fivb.org looks back at the FIVB Men’s U21 World Championship, where Russia were crowned kings. 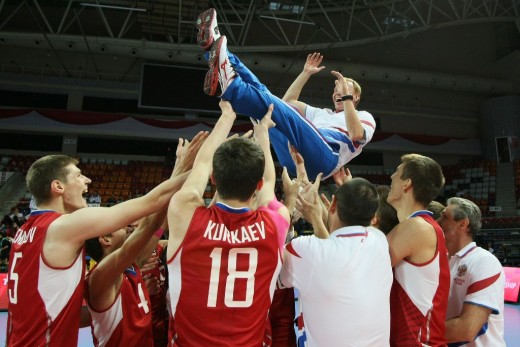 Russian volleyball hasn’t been short of glory in the last two years. First came Olympic gold in London last year and that was followed in 2013 by the FIVB World League title and the FIVB Boys’ U19 World Championship, so there was definitely the feeling that the U21 team had something to live up to.

“Russia beat Brazil at the Olympics and in the World League, so we had to do it today,” Russia captain Egor Feoktistov said.“We were worrying about this match, but we also prepared hard. We played as an organic whole today and that’s what we had to do to play effectively. We also had a good spirit that meant we were able to stop our opponents from getting into the match.”

Russia began the tournament well with wins over Brazil, France and Venezuela before they slipped to a loss against Italy in pool play. They quickly rediscovered their form against Tunisia in the Round of 16, continued their run with a win over Iran and then gained revenge by defeating Italy in the semifinals.

Along the way, 18-year-old Viktor Poletaev showed he was a player of real promise by winning the MVP award. It capped a remarkable 2013 in which he also won gold at the 2013 CEV Youth Volleyball European Championship, the FIVB Men’s U19 World Championship and the European Youth Olympic Festival.

“I was very surprised, especially since I am much younger than most of the players,” the 193-cm Zenit Kazan player said. “The MVP is usually a member of the team that wins gold, so this individual award was a very nice addition to our result as a team.

“Although the final game was supposed to be the toughest match for us in Turkey, everything seemed to go so easily for us and eventually we really enjoyed the game. But I have to say that Brazil did not really show what they are capable of. However, I am happy that once more, as we did in the Olympics and the World League Finals this year, Russia beat Brazil.”

Italy recovered from their loss to Russia to defeat their trans-Alpine neighbours France 3-1 in the bronze-medal match, but it was a bitter-sweet moment for coach Marco Bonitta, who knew he would be saying goodbye to a number of his charges who were moving up to a different age group.

“I am very happy with the result,” he said. “But I am also sad, because I am going to part from this team as they will not be juniors anymore. I want to thank all my players because they got incredible results and made me really happy.”