Russia’s Dinamo MOSCOW and Dinamo KAZAN will extend their domestic rivalry to the international stage as next week these teams cross their ways in the Playoffs 12 of the 2014 CEV DenizBank Volleyball Champions League – Women. 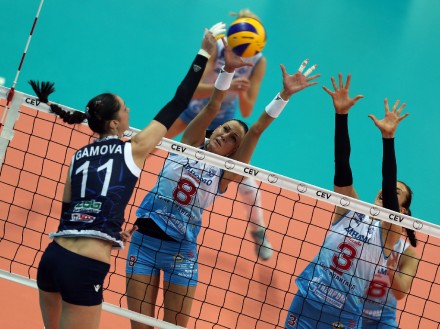 The same happened last year where at that same stage of Europe’s elite club competition Dinamo KAZAN beat the Muscovites twice, first away (3:1) and then also at home (3:2).

“Our goal in the prelims was to finish first in our Pool, especially taking into account that we have a very strong team this year” Ekaterina Tretyakova says. “However, we could not achieve this goal as we lost 1:3 in Italy to RebecchiNMeccanica PIACENZA in the last round of the prelims. We had a series of tough matches and our opponents were very strong. Maybe only Crvena Zvezda BEOGRAD was a little weaker, but PIACENZA and Igtisadchi BAKU were very strong forces to reckon with” she adds. “Since we finished second in the Pool, now we got to play Dinamo KAZAN already in the Playoffs 12.”

Dinamo MOSCOW head coach Svetlana Ilić is preparing her team for what she dubs as “an extremely important game with KAZAN.” As for the DOL, she does not sound too surprised: “I was not that surprised that we got to play Dinamo KAZAN in the Playoffs 12. We did not top the charts in our Pool, and there are three Russian teams that this year qualified for the Playoffs, so there was a chance that two would meet immediately in the round of 12. We are going to play Dinamo KAZAN a few times this month, because apart from the CEV Champions League, we will also play the final stage of the Cup of Russia. We need to mobilize all of our energy to play our best.”

Dinamo MOSCOW will be playing Dinamo KAZAN next Wednesday, January 15, before the return game coming up on January 22 in the capital city of Tatarstan.