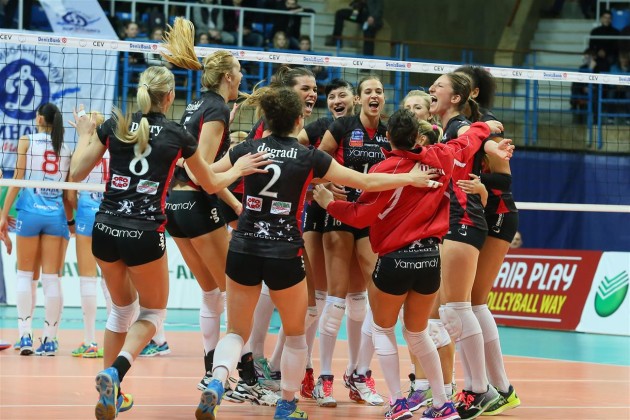 The Italian team made a huge step towards F4 after the first leg of Playoff 6 played in Italy since it beat Dinamo by 3-0. It was already a major upset.

Busto needed to win at least one point in the second leg (2 sets) to start packing for Szczecin, Poland – and it had all three!

Nataliya Obmochaeva & Co. were so close to win the 1st set after leading 12-7. But, little by little, Busto was approaching and with a 6-1 run in the finish, it turned the result and took the set. It discouraged the home team in rest of the match.

Valentina Diouf scored 15 for Busto while Nataliya Obmochaeva had 13 in Dinamo.

See below PLAY BY PLAY of this game.

END OF THE MATCH

9-17 – Fantastic block from Perry on Shcherban.

7-15 – Float spike by Degradi and terrible reaction of Dinamo’s defense.

4-8 – Busto goest to the 1st technical time-out with solid gap.

3-6 – Two Aces by Perry! Previously her spike was also successful – 3 points in a row from American.

1-1 – Both coaches mixed line-ups and gave the chance to substitutes.

9-15 – Busto heads toward Final Four after another good spike from Diouf. Podkopaev forced to call time-out!

9-14 – Shcherban missed counter attack, Diouf was successful on the other side.

22-23 – Diouf made several mistakes, but won this important point!

13-10 – Pisani blocked Shcherban. Busto is back in the game.

Do you know what is “Bagherone”?