The incident on the Samara – Moscow flight, a few days ago, during which the Russia U23 men’s volleyball National Team player Aleksandr Kimerov was taken off by force from the plane, caused more controversies than expected. 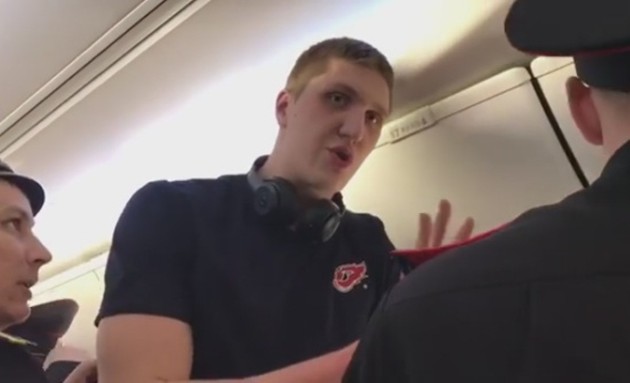 A low-cost company “Pobeda”, on whose flight the incident occurred, has issued an official announcement, explaining its version.

“A passenger Aleksandr Kimerov was taken off the DP422 flight because of pronounced aggression, numerous insults of the crew members, and the threat he voiced to arrange a ‘show’, during the flight. The passenger repeatedly insulted the crew, stressing his celebrity status, and claiming for more comfort and attention than other passengers. With the agreeing of the pilot in command, it was decided that the troublemaker should be removed from the flight,” the Samara-based airline explained.

A low-cost company emphasized that Kimerov was flying with other volleyball players, “not inferior to him in height but who quietly took their seats and didn’t make scenes.” It plans to file a lawsuit against the Fakel Novy Urengoy member to recover the costs due to a flight delay of almost half an hour.

The player himself had a different point of view.

“I and several other players of Fakel flew from Samara to Moscow before the rest of the team for personal reasons. We took our places but, unfortunately, I didn’t get a ticket to the seat at the emergency exit where such tall passengers are certainly more comfortable. Therefore, I asked the stewardess, if possible, to move me there. She answered that these seats are more expensive than usual, and when I offered to pay her the whole price, she refused. Our conversation was heard by the girl, who was sitting just at the emergency exit and who agreed to swap her seat with me. However, the stewardess told us to return our seats,” Kimerov said.

The athlete explained to the stewardess that elementary laws of physics don’t allow him to fully squeeze into the narrow gap between the seats, which she interpreted as rude behavior and called the police. After other passengers confirmed Kimerov didn’t violate public order, two police officers left the plane but returner later with two more colleagues, saying that stewardess has written a statement against him.

“Realizing all the absurdity of the situation, but being a law-abiding citizen, I obeyed and, together with the policemen, left the aircraft cabin. I flew to Moscow a few hours later, along with the team,” Kimerov added.

See the video of the incident.