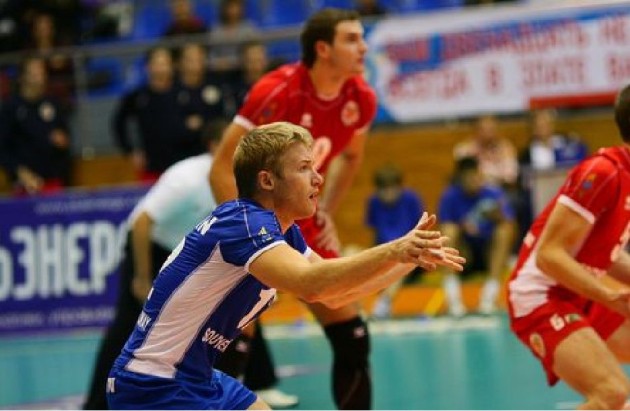 Perm was the host of the second round game against Soligorsk. Both teams lost in the first round, and it was obvious that they need to get used to the Superleague championship. But the visitors started better. From the first minute they seemed organized ant took the advantage (5:8, 10:16). Perm, however didn’t give up. After the second technical time-out they were doing well both in attack and on the block. As a result, the gap in the score started to decline and reached the minimum by the end of the set – 22:23. However, a successful attack by the guests, and then a bad game at the reception by Perm, Soligorsk team took the set 1-0.

With the start of the second set there was a hard fight, before the first technical time-out the teams were alternately gaining points (7:8). Then the players of Vladimir Putin stepped forward (16:14) and the Perm reached the end of the set with a three point lead (20:17). The end of the set got very exciting. Perm repeatedly made mistakes in the attack and their slight advantage went without a trace (22:22). The hosts then made two good combinations and got two set balls (24:22). But Soligorsk played well on the block. Moreover, they got to their set point (24:25) and did not miss the chance.

After blocking Alexandar Simeonov Perm got to a lead 2:0. But obviously Soligorsk caught courage from the end of the the second game and kept the threads of the game in their hands (5:8). The hosts, however, did not let the guests get away, clinging to each draw. After Yakimov scored three points in a row, the score was equal – 15:15. Again it was “point to point” game. It was like that until 20:20. And then, Soligorsk organized a couple of good attacks, a couple of mistakes by Perm and Soligorsk received four match points (20:24). Perm managed to save the first two. The next rally is the latest. Powerful blow by Artur Udris finished the game.

Viktor Sidelnikov, Soligorsk coach: “The game was exciting for us, because Perm is our direct competitor. Playing on someone else’s court is always difficult. We did not play very well with Dinamo. But we have only recently met. We do not have a coherent game. The only thing that I asked the guys is that we make fewer mistakes. I said that if we make less than 20 errors, then we can win. But I think that the turning point was in the second game, when the score was 23:24. We closed their attacks. The game was hard, we played well, as did our opponent. And we made mistakes, in the reception and in attack. But in general, I am satisfied that we had won. I liked how Perm played. They have a young team. If they eliminate some errors, they will be tough opponents.”

Vladimir Putin, the head coach of Perm: “We have the same team. Naturally, we don’t have a lot of experience. Our opponent has a tall team, more experienced, equipped, including foreigners. We have young players and the made some mistakes. That played an important role when the score was 23-23 or 24-24. They are higher class as the class of the majority of the Superleague teams. It is evident that our team needs strengthening. However, the championship is just beginning. People gain experience. Now we will have a meeting. We will examine this confusion.”

POL M: Clear victory for the vice-champion of Poland