Zenit Kazan of Russia secured one of the two semifinal spots of Pool B in the Men’s FIVB Club World Championship by demolishing Zamalek of Egypt in straight sets. The final position of Zenit will be determined by the outcome of the match between PGE Skra Belchatow and Al Arabi Doha. 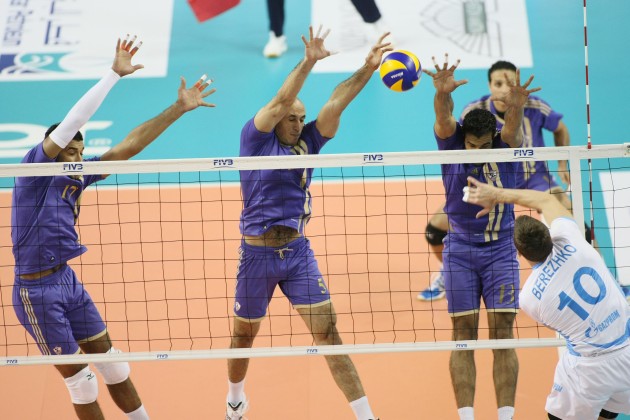 The final position of Zenit will be determined by the outcome of the match between PGE Skra Belchatow and Al Arabi Doha later today.

The winning side held huge margins in the categories of blocks (12-2) and service aces (8-2). They made 14 errors to 21 by the losers and every player in Zenit Kazan’s roster saw action in the match.

Evgeny Sivozhelez and Matthew Anderson each collected three blocks and two aces with 10 and 9 points respectively for Zenit Kazan while Maxim Mikhaylov contributed 10 points with one block and two service winners. Reda Haikald and Mohamed Badawy each finished with 9 points for Zamalek.

Matthew Anderson’s blocking and Evgeny Sivolzhelez’s attacks helped Zenit Kazan to build advantages of 8-3 and 16-8 at the technical stops of the first set. The Zamalek side committed a total of 10 unforced errors as the Russian club took the set 25-13. Sivozhelez finished with five points while Anderson totaled three, including two blocks.

Anderson continued to be the cornerstone of Zenit Kazan in the second set when he added one more block and two aces for the 8-6 and 16-9 differences at the two mandatory pauses. Reda Haikal and Mohamed Badawy were main offensive weapons for Zamalek. Coach Alenko of Zenit was using part of his reserve players in the late part of the set with the same positive results. Alexev Cherimisin and Anderson increased the gap to 22-14. Zenit Kazan won 25-19 despite some late reaction from the Egyptian club.

The third set was not very different as Zenit Kazan led 8-4 at the first technical time-out relying on their serves and high defensive wall. The margin widened to 16-10 at the second stop. The set concluded 25-14 with Mikhaylov and Sivozhelez as the big guns for the winning side.

FIVB and Qatar have development as common goal