Omichka OMSK REGION cruised past Jedinstvo BRCKO once again in straight sets to make it to the 1/8 finals of the 2013 CEV Volleyball Cup and play there Igtisadchi BAKU of Azerbaijan. Read the latest news from volleyball world on worldofvolley.com. 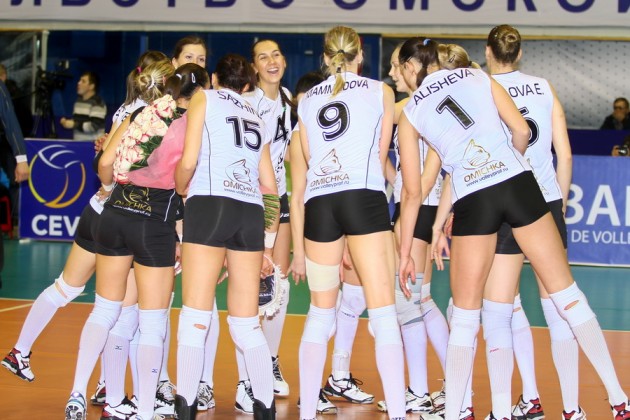 Omichka immediately set the tone of the game in the first set (8:3) and enjoyed a margin of 10 by the second mandatory stop, finishing it off in only 16 minutes with the massive score of 25-8.

Natalya Mammadova helped Omichka cruise to an 8:5 lead in the third set before the Bosnians fought back to 8 all. Omichka gradually opened the gap well supported by the great actions in defense by their libero Viktoria Kuzyakina and eventually pocketed also this section of the game with the score of 25-20. It is worth mentioning that by the time the scoreboard showed a 20:16 for OMSK, the youngest player in the field, Jelena Mladjenovic, only 15, also joined the game.

Olga Fateeva replaced Mammadova for the start of the third set but this did not change much in the development of the game as OMSK went up 6:2 and 8:3 even though the Bosnians were trying to do their best to stay tuned, saving even four consecutive attacks by Omichka in one rally. Omichka was up 16:11 by the second technical time-out and by exploiting their experience the Russians could eventually finish it in three sets (25-17).

“We could not show our best play today and I would like to congratulate Omichka” said Goran Hadzic, the head coach of Jedinstvo, after the match. “Our team was completely rejuvenated this past summer and hence we have young and inexperienced players. However, I think that even with the group from last year we could not really influence the result of our clash with the Russian club. I regret we could have won a set especially by the time Omichka played relaxed and feeling no pressure”. Questioned about the six consecutive titles claimed by the club in the national league, Hadzic said: “The city of Brcko was a well-known Volleyball center of the former Yugoslavia and even two captains of the Yugoslav national team were born there. Unfortunately many young players have left the city in recent times and hence we can’t put together a strong and competitive team”.

“I am very pleased with our performance from today. Of course we had some problems but we did show good Volleyball. I am especially glad that Nelli Alisheva has completed her recovery from an injury” stressed the head coach of Omichka, Zoran Terzic. “My team was very focused right from the start but then relaxed since things were quite easy.  As for our next opponent, i.e. Igtisadchi, we know pretty much about them; they have many members of the Thai national team that I know from international competitions I have attended for Serbia. It will be a very interesting clash because Omichka has tall players while Igtisadchi’s girls are shorter but very fast”.

“Today we got everything: we played joyfully and got a good result for our fans. You can’t relax even if your opponent is weak and even though we slowed down after the first set, we were able to pull together also for the remainder of the match. We will play Igtisadchi in the next round; they have many members of Thailand’s national team that I know from the time I have spent in Switzerland. They are not very tall but their defense is great. We need to serve and attack well to stand their way of playing” says Omichka player Olga Sazhina.

“In the second set we started making many mistakes as we had lost our focus. This is something we can’t afford if you play stronger teams. Igtisadchi plays a very fast Volleyball and in Baku they will enjoy the support of the local fans. However, we will do our best to make it to the 1/4 finals” concludes Natalya Mammadova.

POL W: Belcik believes in SOPOT chances to recover after weak start in the season