Now when the season in the Turkish Sultanlar Ligi is over, we can openly talk about the transfer market. 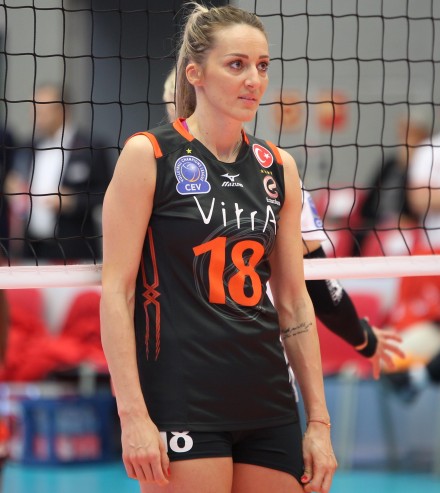 The rumor that for a long time is “public secret”, seems to become real. Maja Ognjenović will not play in Turkey anymore, she will move to Russia. Her new team for season 2018/2019 will be Dinamo Moscow, champions of the Russian Superleague.

The 34-year-old setter will play in Russia for the first time in her career and she will have the big challenge there.

In the last two seasons, she led Eczacibasi and this year they were closest than ever to win the title but … However, she played more than great (see stats).

Interesting, although they could finally find themselves in the same club after a long time, the coach Terzić and Ognejnović will not renew the cooperation from Crvena zvezda and Metal Galati when they were in the same club. The reason is, as rumors say, the transfer of coach Terzic…

Recall that in the earlier rumors the Turkish media have written that she will move to Fenerbahce and in the same moment have written that Terzic will also move to Fenerbahce… when both sides denied that rumors, the story went in another direction, that Maja will go to Dinamo where Terzic is still coach… Anyway, the two of them will not be in the same club next season.

FRA M: Thanks to 89% reception as a team, Tours kick out Ajaccio to advance to playoff finals

She should have stayed in eczacibasi for the next champions league season!
What have you done maja girl? LOL.

Re: @BRAZILvolleygirl
Moscow did qualify for the Champions League…that means Maja will be playing CL next season.

I mean eczacibasi had a really nice team chemistry and maja had an important role in the team. She should have stayed 1 year more year to maintain this success but sure we cannot know why she wanted to leave her team or the country, personal things… On the other hand, eczacibasi is far better than dinamo moscow, anyways…

Re: @BRAZILvolleygirl another ignorant post from this girl. This girl has no idea about european volleyball. haha
Players move on or stay after their contracts. Some players go and find better contracts when their previous contracts end.
Eczacibasi would not have any trouble finding a replacement. Maybe they can even get Kim and Nootsara. That would be a fantastic team next year.
Dinamo Moscow needed Maja. Vetrova and Babeshina are good setters but are not Maja who can make magic out of bad reception. Dinamo Moscow is a rich club. She will be compensated and even rested. Russian League is as not as strong as it used to be. She’s not that young and in a strong club in a weak league, they’ll take care of her body and even prolong her career.

Re: @rivers
Ignorance is bliss..
Unfortunately, ignorant people think that they know everything like you.
And there is something called ‘contract renewal’. You cannot know whether she was offered a better contract, we are making predictions here. Really, where do you live and what is your iq score? If you give the location i can predict your score! Btw, dont follow my comments like a crazy human being and dont attack me! You are pathetic funny person, GIRL!

Re: @BRAZILvolleygirl
ONE thing we know for sure is she’s not staying in Turkey. Are you that stupid or are you just acting dumb? All your comments an eyesore.
Dinamo Moscow could’ve offered the best offer for her and you still wouldn’t believe they did it. l-o-l

Re: @rivers
And i said that she SHOULD HAVE STAYED. Really, i cannot argue with such a dumb personality, it is waste of time. Most likely you have mental retardation. GOOD LUCK IN YOUR LIFE, GIRL!!

Re: @rivers
I didnt say that dinamo moscow will not participate in the champions league. Since you have mental retardation i am not blaming you. Btw, dinamo didnt transfer woloscz or whatever her name is, which is a good thing. She is too weak for Russians. XOXO

Re: @BRAZILvolleygirl
I don’t quite understand why someone SHOULD HAVE STAYED in one place but cannot move on to a new environment. she has her own choice and she will make the best choice for herself!!!!

Re: @Ignorant Asian
Unless the league contains 8+ Olympic semi-finalist or unless they have went to Olympic, they are just worthless players that should disappear. That is how a feel about her view on players. She said Dominican women’s volleyball team consist with players that are ‘too old’ and they should just retire from volleyball. I mean how young is Jaqueline, Dani Lins, Leia, when players are capable to play and wants why can’t they stay in the national team. By all standard, Tetyukhin should have left the national team right after 2012 Olympic. To be fair, I don’t find Brazilian men’s national team to be that young, should they just retire?
I mean we are tired of internet trolls, who just hate everyone she doesn’t know, I mean there players that you may not know and are legendary and when there are new about that person, does it make that person not news worthy?

Re: @rivers
Also, what is ‘reflects mirror’. Really, how old are you? LOL

The russians start to understand that you can’t no longer win playing parabols post 4 and with the opposite and block. Dinamo Moscow has fantastic players high athletic technical . The only question is : will the coach leave the keys of the game to Maja to play the fast, efficient and modern vollyball she likes to play . If she can play fast balls on the wings with Scherban or Lazareva, quick sets and baskets with Fetisova, or Efimova or other middleblockers , pipes with Goncharova ….Dinamo Moscow could be a pretendant for the champions League . But will they leave her the keys….

I find it hard for Ezacibasi, Tijana didnt make it this year, and Maja leaves for Russia… double trouble.

Who would be stupid to play in a team that pay less when one can get a better pay? Professional volleyball players careers are limited 20 years or so if their bodies stay healthy and no career ending injuries. So, one wants to get the most out of it. Money is usually the main factor.

Where is Maja Ognjenović in Dinamo Moscow? Has an Injury?