“I want to share my passion for Volleyball with the stars of tomorrow” said Serbia’s Olympic champion Vladimir Grbic on Friday night in Vienna as he got a lifetime achievement award during the annual European Volleyball Gala co-hosted by CEV and the Austrian Volleyball Federation (OeVV) at UNIQA Tower. Read latest volleyball news on Worldofvolley.com. 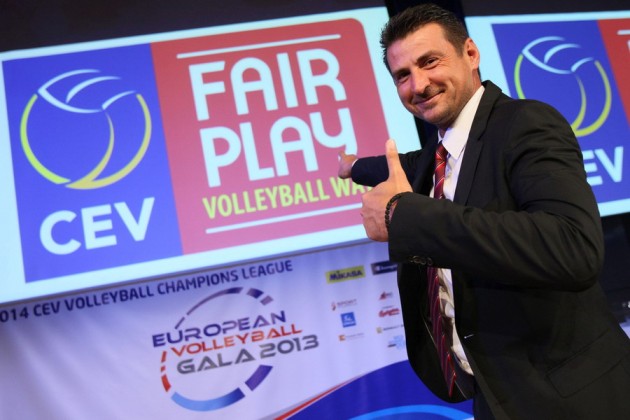 Though Grbic retired from competitive sport in the summer of 2009, the Volleyball family does not stop showing its recognition for his contribution to the sport. Grbic was inducted into the Volleyball Hall of Fame in 2011 and this past Friday another special award followed for the current Vice President of the Volleyball Federation of Serbia. “This award has got a very special significance for me. In some way I am prolonging my Volleyball career though I quit the sport four years ago. Time has come for me to share what I have learned over the years” he stresses.

Vladimir Grbic is an Olympic champion from the 2000 Games in Sydney, a former European champion (in 2001) and silver medalist from the World Championship (in 1998). A real globe-trotter, Grbic played in his native Yugoslavia before moving to Italy, Japan, Brazil, Greece, Russia and Turkey. “I am very proud of my roots, my country, my people and everything I do is conceived and address to pass on my passion for Volleyball to the children. I do not seek any personal benefit or satisfaction because I am convinced that somebody up there is overseeing what we are doing in our lives. What is good in this world shall be passed on to our children” he says. Grbic currently runs a Volleyball school and is involved in the organization of Beach Volleyball competitions. “My major goal is to transfer that passion to the children and make sure that once they become adults they will be good people. I want the children to learn the values I have been brought up with. I want the children to look at their heroes the same way I did when I was a pupil and followed the actions of my father Milos” he continues. “This role I have taken up is even more demanding but at the same time more stimulating than the goals I wanted to achieve as a player”.

Grbic looks forward to the establishment of a Serbian “Hall of Fame” though he feels the country is not ready for this. “We even do not have a Sports Museum, so the idea of some kind of Hall of Fame sounds beyond our reach. In Serbia we have got great athletes that any country in this world would be extremely proud of. Though this Hall of Fame does not exist, we are very grateful for the many awards that Volleyball players have received in the past few years”.

Grbic feels like his family does somehow portray the quintessence of Volleyball, its spirit of fair play that CEV is drawing much attention to via a special campaign that got started this past Friday in Vienna. “We are very passionate and we give it all especially in order to help our young generations to be able, one day, to proudly represent their people and their country on the international stage”. Grbic has got three daughters – Ina, Una and Mila – but does not want to determine their fate or to predict any Volleyball career for them. “They shall be free to decide what they want to do but of course I will stimulate my daughters so as they take up some sport for their well-being and a healthy lifestyle” he says.