written by WoV May 7, 2019 source: vakifbanksporkulubu.com

After winning the 11th national title, second in a row, management of the Turkish Women’s Volleyball team VakıfBank decided to make some radical moves when it comes to the roster! 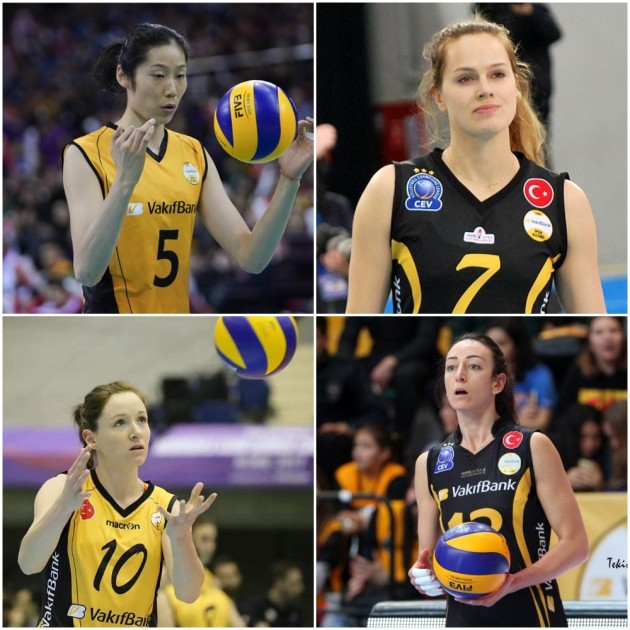 VakıfBank parted ways with four foreign players right after they clinched the domestic title, a few days ago. The İstanbul giants published on their website that they will not extend contracts with: Zhu Ting, Kelsey Robinson, Lonneke Slöetjes, and Chiara Di Iulio!

With all due respect to all the other players in the club, Zhu Ting was definitely the main star in all three seasons during which she has been playing for VakıfBank. She scored 2,150 points in 125 matches and won the FIVB Club World Championship, CEV Champions League, and Turkish League twice each, as well as the Turkish Cup and Super Cup once each. Due to the decision of the Chinese Olympic Committee, Zhu will return to her home country to better prepare for the 2020 Tokyo Olympics but will join VakıfBank after that! This for which club she might play next season.

An American outside hitter Kelsey Robinson has been in Vakif since the 2017/18 season, scoring 730 points in 92 games and winning the FIVB Club World Championship, CEV Champions League, Turkish Cup and Super Cup once apiece, and Turkish League two times.

Out of these four players, the Dutch opposite hitter Lonneke Slöetjes has been the member of the club the longest – for four straight seasons. Title summary: two each in the FIVB Club World Championship and CEV Champions League, three in the Turkish Championship and one each in the Turkish Cup and Super Cup. While wearing the yellow and black jersey, Slöetjes scored 2,311 points in 158 games. She will likely continue her career in Asia.

The Italian outside hitter Chiara Di Iulio came to VakıfBank in January and played 14 games ever since, producing 51 points and winning the Turkish Championship a few days ago.

What about Milena Rasic? I hear she has already signed with the Russian Moscow team.

Where did you saw that news ? Rasa is great blocker, i hope she move out, Turkish league become worthless. Maja Ognjenovic went to Moscow last year. Russia and Italy is best so far and will be in 2019/20 season. Ezcibasi is making lot of transfers, i calculated that, otherwise even Tijana would leave. Next year Fener will be strong, and we will se Ezcbasi transfers.

Re: @Vic-ers
you continue hoping she move out buddy,but she stays.in fact no one leaves. sloetjes and larson have to go to easier leagues due to their ages (both 33) , robinson moves to fener.. eczaci keeps all other foreign players, fener sent all except vargas but transfers Naz, mikailovic and robinson. in vakif, zhu gives a one year compulsory break, and probably Gabi and Haak will join vakif…

russian league is sportively weak while italian league is financially. do u know, the highest paid player in italy is bosetty with 200k euros while there are many players in turkey who earn over 500k even 1000k or over, so turkish lleague is both sportively and financially strong and only attractive one for stars.

Re: @Vic-ers From ivolley magazine website. I did a search and then I performed a Google translate from Italian into English. https://www.ivolleymagazine.it/2019/02/22/pallavolo-volley-transfers-milena-rasic-il-futuro-sara-in-russia/
Zhu was reported to have made 1.5M euros this season + bonuses thus making her the highest paid player in the world. Her starting salary was 1M euros the first year, got a big raise the 2nd year renewal and then the third renewal, with Dinamo-Kazan rumoured to offered her 2M euros. Vakif offered her 1.5M + performance bonuses. She also got endorsements from China and bonuses of over $1,5M from the sports federation, town and businesses after winning the Rio gold. In fact, Under Armour just signed her a month ago. She is China’s national hero. When she returns, I expect she will go back to Vakif or to one of the Russian teams. Imagine Zhu and Haak on the same team? I like Haak, tall, young and aggressive. I put them up against any team.

AND FINALY – Fabris signed for…