In the Turkish league's greatest derby, Fenerbahce won against Galatasaray 3:1. V. Nikolov was the top scorer for Galatasaray, while in the winning team Marshall had 25 points, and Ivan Miljkovic 24. 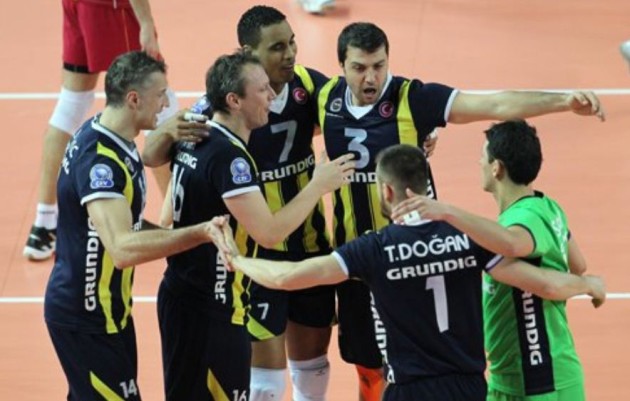 Fenerbahce played a better game in the first set and was leading on both tehnical time-outs 5:8 and 12:16. Galatasaray made mistakes in the final moments, so Fenerbahce won 22:25.

The second set startewell for Galatasaray, on the first technical time out it was 8:6, on the second 16:14. Miljkovic did not leave the game, and Marshall contributed to a come-back, 20:19. Galatasaray had a set point (24:23) but didin’t use it. Serbian star Miljkovic produced 10 points throughout the set, and helped Fenerbahce win the second set for a 2-0 lead, 24:26. Galatasaray’s fans threw substances and explosives on the field.

At the beginning of the third set, Fenerbahce jumped forward and grabbed 2:7 lead. However, by increasing the tempo of the attack Galatasaray reduced the difference 7:9. Later they managed to take the lead 20:17, but Fenerbahce didn’t give up and 20:20 equalized once more. It was a point for point game, and the home team made less mistakes to win the third set 27:25.

From the fourth set started with the lead for Fenerbahce 1:4, but Nikolov led Galatasaray to a come-back and a lead on the second tehnical time-out 16:14. After that they had three point lead (21:18), but Fenerbahçe was once again in the game 21:20. Galatasaray finished with a great defensive error and the attack of Miljkovic for 24:26 and an important win for Fenerbahce Grundig.

For more volleyball news from this country click on Turkey.