Vakifbank ISTANBUL completes the draw for the semis of the 2013 CEV Volleyball Champions League – Women as the winners of the 2011 edition claimed on Thursday also the second round of their Playoffs 6 derby with Eczacibasi VitrA 3:1. This and other volleyball news read on Worldofvolley.com. 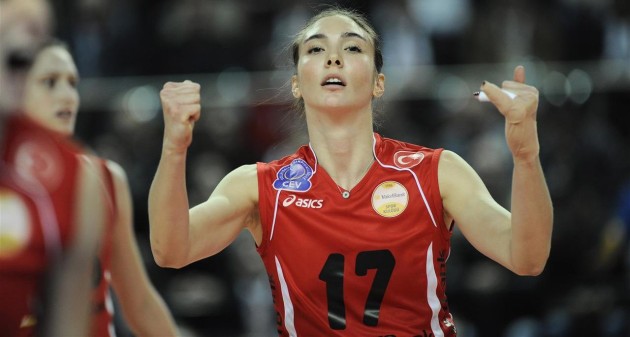 In the semis scheduled for March 9 Vakifbank will be playing the hosts of the final four, i.e. rookie Galatasaray Daikin ISTANBUL.

After losing the first round last week, Eczacibasi needed to score a win to eventually call for the golden set and the group coached by Italian-born Lorenzo Micelli started out pretty well (8:5, 12:8) with Vakifbank mentor Giovanni Guidetti stopping the game as Vakifbank was trailing 9:14 and was evidently struggling to stand the good serving contributed by Neslihan Darnel. Though Vakifbank responded well by scoring three consecutive points, it was Eczacibasi that dictated the pace of the game after the second technical time-out (18:14) but Vakifbank could fight their way back (18:17) before Jovana Brakocevic drew level at 18 all. Two errors by Eczacibasi could help Vakifbank flip the charts around and it was Brakocevic – well anchored by setter Naz Aydemir who finished the set at 25-19 for Vakifbank.

Vakifbank stretched momentum also to the early phases of the second set (6:2) and got a margin of five by the first technical time-out. Asuman Karakoyun replaced starting setter Özge Cemberci Kirdar for Eczacibasi as the score stood at 10:4 for Vakifbank and even though Lioubov Shashkova could reduce a bit the gap (11:7), Vakifbank could firmly keep control of the operations (13:8). Still via a couple of substitutions – and with team captain Esra Gümüs replacing Senna Usic – Micelli could find a way for Eczacibasi to claw back and even the score at 16 all. It did not last that long as Ayse Gürkaynak re-stored Vakifbank lead only a few moments later (19:17) and after another tie at 19, it was Guidetti who stopped the game. Neslihan Darnel stood out from the serving line to move Eczacibasi to the front (22:20), Guidetti called his second time-out but Eczacibasi did not lose their focus and with Shashkova and Büsra Cansu on fire could go for the provisional 1:1 (25-22).

Vakifbank did not lose composure and responded well right in the early phases of the third set (6:3, 10:5) and though Micelli attempted to stop their run with some more changes, Vakifbank claimed a terrific 19:9 lead going into the final rush. That gap was not going to be compensated anymore and with a couple of aces Bahar Toksoy could cash the 25-16 whereby Vakifbank could start glancing at the finish line.

The start of the fourth set was very close (7:7) before Eczacibasi went to the front by scoring three points in a row (11:9). However, none of the teams could find a way to claim a comfortable lead and the score remained very tight up to the second technical time-out. With Vakifbank having gone to the front at 18:17, Micelli asked for a time-out and Eczacibasi could briefly change the course of the game with Darnel and Maja Poljak contributing a provisional 21:19 lead; after a short break Vakifbank stormed back scoring three in a row but Shashkova responded sealing the 22 all. After missing out on a few opportunities to finish the match, Vakifbank could eventually celebrate their qualification for the final four (28-26) to play there the hosts and compatriots of Galatasaray. Jovana Brakocevic top scored in the game for Vakifbank with 26 points while Lioubov Shashkova registered 18 for Eczacibasi in that losing effort.

“It was a great Volleyball match and in the end we got the upper hand, but in my opinion both teams tonight can leave the court as real winners because we all showed great Volleyball” Guidetti says.

“For me this was the real final of this competition but unfortunately we had to cross our ways in the Playoffs” Lorenzo Micelli adds.

“The game was a real thriller and I have to say that both teams did play really well. I have to congratulate the players of both teams on their efforts. We still have a busy remainder of the season with the national league and Turkish Cup, so as from now we’ll focus entirely on the domestic competitions” he concludes.