Is it fair? This years CL champion Fenerbahce lost their first, but unfortunately the most important match of this season in Turkish league - playoffs semifinals against Vakifbank - and also chance to play Champions League next season! 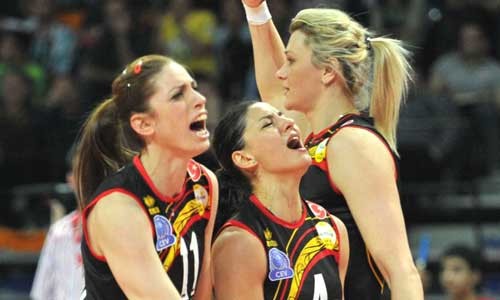 In this current Turkish playoffs system, something like regular season or points does not bear any importance at all! Very painful blow for undefeated „Yellow Angels“ who were considered to be the biggest favorite for the Turkish Championship and great revenge for Vakifbank which was the defeated side of the last years finals and which also – despite last years victory, all invested money and effort – has not made any good results in Champions League this year.

So what happened, are the battles against other three strongest Turkish teams (Vakifbank, Eczacibasi, Galatasaray) harder than Champions League matches?

Of course, Turkish league version of Fenerbahce is not the same team which has won the Champions league! Instead of 5 foreigners, there can be only 2 on court. Coach Ze Roberto decided to play with Lyubov Shaskova and Kim Yeon Koung in starters and Tim Logan on bench, Fabiana was not in team roster. What is more, Fenerbahce team captan Seda Tokatlioglu sprained her ankle and left the game in the first set.

Malgorzata Glinka and Jelena Nikolic of Vakifbank became the stars of the game.

„Last year we won the Champions League, but lost Turkish title to Fenerbahce – I hope that it will be on the contrary this year,“ said Vakifbank team manager Ramazan Yildirim.

„We did not give up even when losing 3:9 in the 4th set,“ explained Vakifbank team captain Gözde Sonsirma, „and we still believed in victory. But it is not an end, just a beginning – we will play our first finals on Sunday and I hope that on Tuesday we will become champions.“

The other finalist is Eczacibasi which defeated Galatasaray 3:1 on Saturday evening.

You can hear „We came to Ankara only for championship,“ from them as well, especially after they defeated Vakifbank 3:2 in playoffs group matach.Yesterday, Maja Poljak was outstanding with 16 points including 10 blocks, Neslihan Darnel was not bad too (19 points). Their X-factor seems to be receiver Senna Usic (19 points) who could not play during the regular season due to 2+1 foreigners rule.

At Galatasaray side, 27 points of opposite Rosir Calderon were not enough to bring the game to an good ending.

BRA M: Who will be champion of Brazilian Super league?

TUR W: Galatasaray down Sarıyer to interrupt their...

Guidetti awarded Man of the Year in Turkey