TUR W: “Neslihan a model to look at for all of our women” says Turkey’s Sports Minister Kilic

Turkey’s volleyball has tremendously developed in the past few years with the country having played host to many international competitions and the women’s national team competing at Earls Court in what is Turkey’s first Olympic appearance in the sport. Sports Minister Suat Kilic, 42, was also in attendance as the group coached by Brazilian-born Marco Aurelio Motta scored its first win in Pool B by cruising past the 2011 European champions of Serbia. 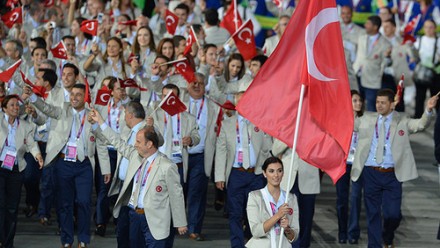 Neslihan Darnel, probably Turkey’s best volleyball player ever, was one out of only three flag-bearers from the sport – the others being beach volleyball players Martins Plavins of Latvia and Natacha Rigobert of Mauritius – during the opening ceremony of the London Olympics. “Our Ministry and the National Olympic Committee opted for Neslihan as she perfectly portrays Turkey’s women, being a professional volleyball player and a mother of a 4-year old daughter. She combines her sportive career with ordinary family life. Moreover, she is also one of the main ambassadors in our bid to host the 2020 Olympics in Istanbul, together with basketball star Hidayet Türkoglu”.

Volleyball has gone through a terrific development in the last Olympic quadrennial in Turkey with the local clubs sky-rocketing to the international elite and standing on top of the podium in the last editions of the European Cups. Outstanding results were mostly claimed by the ladies, and not exclusively by the seniors that are celebrating their Olympic debut here in London, but also by the junior and youth national teams who have regularly medaled in their respective championships. “We have laid down very solid foundations for the sport in Turkey and our next goal will be to bring also the men’s teams to the top. I think this is the next real challenge that our friends from the Turkish Volleyball Federation will take up for the years to come” adds Kilic.

Turkey still hasn’t claimed any medal here in London but the Sports Minister is confident that good results are still to come. “Our weightlifters did not live up to the expectations and could not finish among the top three in their events. My wish is that our basketball and volleyball teams will be standing on the podium at the end of their respective tournaments”.

As for the 2020 Olympics to be assigned next year, Istanbul was short-listed by the IOC together with Tokyo and Madrid. Mr. Kilic says his delegation is carefully observing all operations here in London to try to take some good lessons shall Istanbul be finally given the honor and responsibility to host the world’s largest sports event. “I have to congratulate the LOCOG because they have done a great job here in London. There are some small details to improve but everything is running smoothly and the atmosphere in the various venues is just great”.