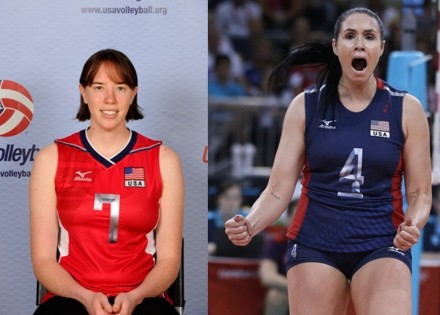 This age-old question has never been decisively answered, but two more former athletes will test the theory this month: former national team players Cassidy Lichtman and Lindsey Berg have been hired as assistants for top NCAA programs.

Lichtman, an outside hitter who played on the national team from 2011 to 2016, is joining Stanford’s coaching staff, where she was a two-time First-Team, All-American. The versatile 6-1 athlete helped the Cardinal reach the national title match in 2007 and 2008, spending time at the setter, outside hitter, opposite and defensive specialist positions.

“Cassidy has an extraordinary volleyball mind,” Stanford head coach John Dunning said, “and now, after playing professionally and on the U.S. National Team for the past five years, she has a wide variety of volleyball experiences.”

Berg, a three-time Olympic setter, will return to her home state to take the assistant position at Hawaii. The 2008 and 2012 Olympic team captain and career assists record-holder at Minnesota began her collegiate coaching career in 2015 as a volunteer assistant for Dartmouth.

The Hawaii position opened up after the departure of Robyn Ah Mow-Santos, also a three-time Olympic setter, due to her husband’s military reassignment to Las Vegas. Hawaii is also adding Tom Pestolesi, a UH alum and head coach of Irvine Valley College, to its staff. Pestolesi will serve as a volunteer assistant while taking a sabbatical from his IVC position.