Volleyball Conditioning Drills are important because a teams level of conditioning can often be the difference between winning and losing tight matches. You can read all relevant news from volleyball world on Worldofvolley.com. 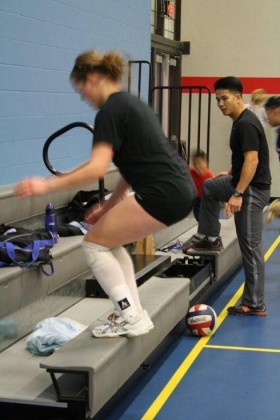 The object of this drill is to learn how to attack the ball every time you approach, even when you are tired.

This drill needs a player and a person to toss balls.

The hitter is hitting balls that are tossed from the setter position. The hitter hits continuously until they hit 10 balls in bounds. The attacks only count if they swing. Hitting cut shots or tips dont count.

This volleyball conditioning drill can be made harder by requiring the good hits to be in a row. For example, if a ball is hit out of bounds, you have to start over.

Also, you can make a rule that if the ball hits the top of the net, it doesnt count.

Off the Floor – Volleyball Conditioning Drills

This is a good workout for volleyball teaching players to get up off the floor quickly to make a play.

Have the players form a line at the end of the court. The first player in line starts by getting down on their stomach.

On the coaches signal, the player gets up quickly off the ground and the coach tosses a ball.

The player gets into passing position and makes a pass to a target.

The toss can be easy so the player can learn to get into good position to pass after quickly getting up off the floor.

As part of progression, the toss can be away from the player so then they must move or dive to get the ball up.

Also, the coach can hit at the player in order to make a defensive dig.

Benefits This volleyball conditioning drill increases a players quickness along with reaction time.

Three players stand forming a triangle. Two players stand fairly close to one another (players A and B), while the third (player C) is about 10 feet away.

Basically, the 3 players are weaving behind one another, setting from only two different spots.

Benefits This drill is good for improving setting accuracy and can also be a good warm up drill or just be used for volleyball conditioning.

This drill starts with 4 players on the court, 2 on each side of the volleyball net.

The ball is played out like a game of doubles. At the end of the drill 4 new players get on the court. This can also be played as queen of the court, winners keep the court.

This is great volleyball training for just about everything – conditioning, communication, reaction, etc.

This is basically a 6 on 6 scrimmage. Each team must have three contacts – a pass, set, and hit. The hit has to always be a tip.

The object of this volleyball conditioning drill is to always keep the ball in play and keep the rally going.

After a team tips, they rotate while the ball is being played on the other side of the net.

Check out our Stretching section. Every Sunday a new story. Tomorrow read about How to Warm up for Volleyball